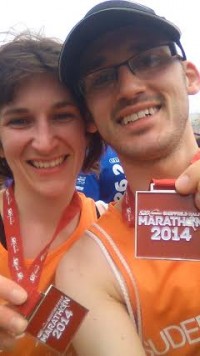 Robert Marchand and Laura Egan have raised about £1800 for SUDEP Action in memory of Rachel Marchand.  Rachel died of Sudden Unexpected Death in Epilepsy (SUDEP) at age 20 in 2009.

Robert and Laura’s fundraising campaign began with a cake sale supported by Great British Bake Off’s Howard Middleton who donated a cake to the sale.  Laura held the cake sale to help her reach her target for running the Sheffield Half Marathon.

Laura commented, “The bake sale in support of SUDEP Action brought the whole office together in a shared love of cakes! It was a fantastic opportunity to spread awareness of SUDEP Action and all of its fantastic work to even more people. An extra special thank you must go to Howard for baking his gluten free “Blood Orange Carrot Cake” which on its own raised £75 and to everyone else who bought a cake and contributed to the final total raised.” 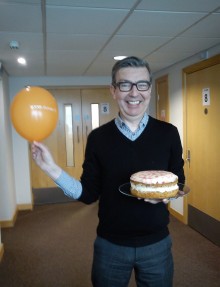 Robert and Laura ran the Sheffield Half Marathon even though it was cancelled on the day due to a water shortage. However, despite this, Robert and Laura decided to run in memory of Rachel.

Robert said: “It was a great experience running the half marathon that “never happened” for SUDEP Action! Knowing we were raising money in memory of Rachel for such a great cause really helped spur us on past the empty drinks stations to the finish line. The people of Sheffield were fantastic providing support, water and a great atmosphere all the way round. I just want to say a huge thank you to everyone that sponsored us for their generosity and support.”

“This was my first half marathon and definitely not my last. Raising money for SUDEP Action in memory of Rachel was a great motivator throughout the weeks of training beforehand and all the way to the finish line. Waiting on the start line for the race to begin was nerve racking but the support of our friends, families and colleagues through their kind donations for such an important cause made it all worthwhile.” – Laura.

Fundraising and Operations Manager Rachel Groves applauded Robert and Laura for their inspiring efforts saying: “What Robert and Laura have done in memory of Rachel is really awe inspiring.  As a small charity we rely on the generosity of people who push themselves to the limit to raise awareness and funds for us to work towards reducing unnecessary epilepsy deaths.  I am so grateful to people like Robert and Laura who make this vital work possible”.