I set up a Memorial Quiz in memory of my son Owen who died in July 2014, aged just 39. I wanted to hold an annual event that would ensure Owen’s memory is kept alive and to raise money for SUDEP Action. As Owen was a great trivia fan and loved writing and taking part in quizzes, it seemed the most natural thing to do.

We held the second Owen Williams Memorial Quiz on Saturday, 23rd January, in the Village Hall in Blythburgh, Suffolk, and raised an impressive £500 for SUDEP Action. We had a packed hall of 18 teams who enjoyed a night of fun but challenging questions, a raffle and a fish and chip supper provided by the local pub, The White Hart. The teams of four answered questions on various topics, including two picture rounds and a Movie sound round. All in all, there were seventy six of us including helpers, the question master and scorer.

It was fitting that the winning team not only included Owen’s sister Kerry but was named after his DJ nickname – DJ Swill. There were also teams consisting of his Ski Buddies, School Friends, Personal Friends and family.

The event was run by me and my friend Debbie Telkman who wrote the questions.  Another friend Wendy Sutton ran backwards and forwards with fish and chips. My partner David Etheridge sold the draw tickets, and my nieces Abbie and Ruby Weingaertner helped with the draw. Thank you to everyone who helped and all the various people who made the effort to travel from places such as Colchester and Bury St Edmunds to take part.

We also held a postal quiz where we emailed the questions out to people, and they returned them to us the next day.  This raised a bit of extra money and the winner donated the cash prize back to the charity.  If anyone would like the questions either for a quiz of their own or just for fun, I can email it to them for a £10 donation to SUDEP Action. 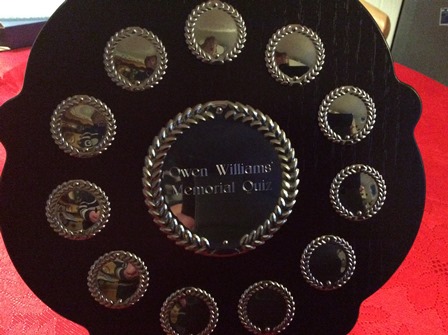 SUDEP Action has been a great support to me since Owen died – I have met many new friends through them, and raising money for this cause helps me to keep Owen’s memory alive and make sure he didn’t die in vain. We have a permanent shield which will be used for many years to come in memory of Owen. Anyone interested in entering next year’s quiz can register their interest by emailing [email protected]