16th Nov 2017
A place to thank, appreciate and celebrate our fundraisers.

October was a mega month for fundraising with lots of supporters raising much needed funds. 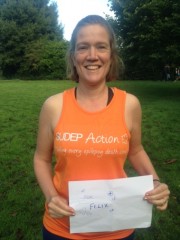 Louisa Murdin took part in the Wimple Half Marathon in memory of Felix Murdin. She informed us: “I lost my nephew Felix to SUDEP earlier this year, and my family has a huge hole in it as a result. I wanted to do something positive to remember him and to help SUDEP Action in their work to understand and prevent epilepsy deaths, and support families in their bereavements. I ran a half marathon which is the furthest I've ever run in my whole life. I ran 13.1 miles (and don't forget that last crucial and agonising 0.1) in 2 hours 15 minutes, with sponsorship from friends and family. I'd like to say thanks to everyone who supported me, and to SUDEP Action for their invaluable work.” 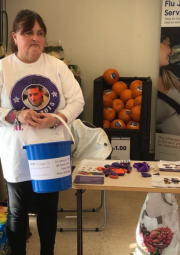 Ro Williams and Linda Wilton held a fundraising and awareness stand at their local supermarket in memory of Owen Williams and Alan Davies. Linda informed us: “On 6th October, Ro Williams and I did an SUDEP awareness day. A lot of people asked questions. Ro lost her son Owen aged 39 in 2014. I lost my son Alan in 2015 aged 30. For Ro, her aim and fight is for research and answers why! Mine is the awareness. We need awareness, no one should find out about SUDEP from a death certificate. Our sons made a difference that day. 2 proud mums fighting for a positive.”

Sophie, Alex and Lucian Murdin and a group of their friends decided to climb the UK’s highest mountain Ben Nevis, in memory of 20 year old Felix Murdin who died of SUDEP in March. And to make the challenge just a little more challenging, some of them swam in a freezing cold loch on the way to the top! 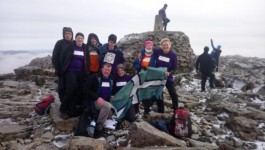 Sophie, Felix’s mum said, “Our lives were devastated when Felix died. The climb was a wonderful thing to do in his memory. We were buoyed up by the support of our friends, and the sun shone as we started the ascent.  As we got higher, surrounded by the stunning mountains, we felt elated but also desperately sad that Felix was not with us. His 17-year-old brother Lucian, along with his friend Kavyian, were first to the summit. Special mention must go to Judy Marshall, who detests cold water but was so determined to raise money for SUDEP Action that she swam in that icy loch – the first time she’s swum in UK waters in 25 years!” 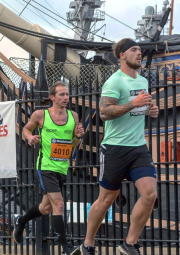 Brad Stead took part in the scenic Great South Run in memory of Rosie Carter. "I completed the Great South Run in memory of one of my closest friends Rosie Carter who died as a result of Epilepsy at the age of 19 years old. The 10 mile course was tough in windy conditions but knowing the reasons why I was doing it got me through in under an hour and a half which is what I aimed for. Rosie was a beautiful person inside and out and raising money for this great cause is something I enjoy and will continue to do" 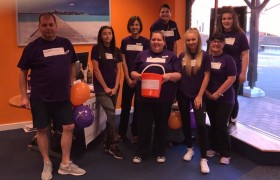 Staff at Ferndown Hays Travel raised funds at the branch and took part in a biking event! They informed us: “At the Ferndown Hays Travel Branch, we did a charity bikeathon in aid of SUDEP Action. 8 of us cycled 152 kilometres in 9 hours. We chose this charity as it is close to our hearts. Yolande's cousin very tragically passed away 5 years ago due to SUDEP at the age of 25. So you can understand why this charity is so important to us. We are very proud of the hard work we put in and despite the sore legs and numb bottoms we had a great day.” 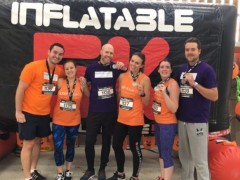 SUDEP Action’s Director of Policy and Development Sammy Ashby took part in an Inflatable 5K event along with friends Katie, Andy, Craig, Lisa and husband Dave. Sammy commented: “It was great fun tackling the obstacles as a group of friends, though in my excitement to tackle the inflatables, I forgot that there was actually running involved - which was a bit of a shock to the system!” 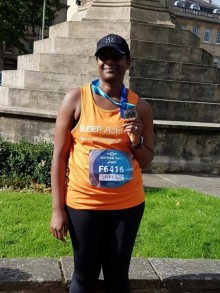 Shelly Johnson, SUDEP Action’ Communications Officer took part in the Oxford Half Marathon, her first long distance running event. She commented: “I am really glad that I managed to complete this half marathon. For someone that really doesn’t like running, I think I have done myself proud. Its proof that ANYONE can do it. So if you think that you can’t do it, or you don’t have enough time to train or you find running boring – YOU can do it!  My best advice is focus on small goals, which you slowly and gradually increase as you go along. And before you know it, you can run for 2hrs 34mins!

Plus, raising money for such an important charity can be quite the motivator.” 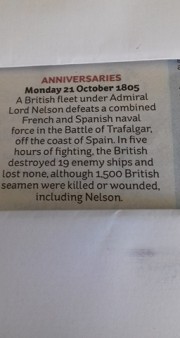 Mags Neilson took part in a Pickle night hosted by a friend, in memory of Saranne Butler. She informed us: “HMS PICKLE was the ship that brought the news of Nelson's triumph at the Battle of Trafalgar and also of his death back to England. The dinner hosted by Mark & Pam Fisher was a great success. There were 3 ex-serving Royal Naval personnel, plus 2 serving at the event. There were various readings throughout the meal. A rousing sing song which was much enjoyed. Finally, a person is nominated as White Rat - who remains incognito until the end of proceedings. He then reveals any unworthy behaviour & the culprit is fined.” 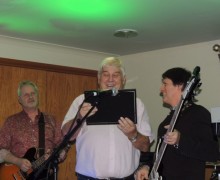 Alan Jeans had a Birthday bash in memory of Stephen McClelland. He commented: “I held a 70th birthday party – thought it was worth celebrating! The Counterfeit 60s/Counterfeit 70s band performed, there were speeches and my old friend and Scottish legend, Sydney Devine attended. It was a great evening that everybody enjoyed. I held a raffle for SUDEP Action which proved to be very successful, donations were given, and the band donated their CD takings.

SUDEP Action means a great deal to me as it does to Chris (wife), they work extremely hard to raise awareness and bring about change for people living with epilepsy as well as supporting the bereaved families.” 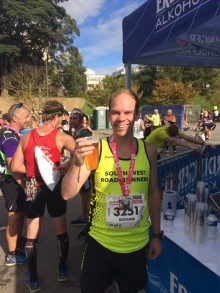 Richard Stone ran the Yorkshire Marathon. He informed us: “In October I ran the Yorkshire Marathon, in memory of my sister Kathryn, who passed away in 1998. The choice was purposefully poignant as Kathryn had lived in Yorkshire for her whole life. My aim was to run the race under four hours, so with that target in mind I set out on three months of hard training in early July, reaching a peak weekly distance of 40 miles. The race itself was on a sunny day, with amazing crowds on the route, along with some equally amazing sights and countryside. Despite nearly stopping at 18 miles, I managed to make it through the last 8 miles, and finished in 3 hours 50 minutes, well within my target. The support from my family and friends, my running club, the South West Road Runners, and colleagues at the Met Office carried me through my training, and also helped me to overcome my fatigue in the last few miles. I’ll admit I was a little overcome with emotion after crossing the finish line, a culmination of all the hard work and effort, combined with the realisation of the achievement and what it meant.

I am especially grateful to everyone who sponsored me with, with this money now helping other families, just as SUDEP Action supported ours.” 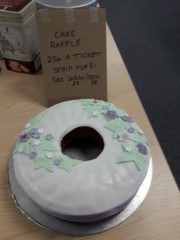 Sarah Cawley’s brilliant workplace raised funds in memory of Sarah’s daughter Jasmine. Sarah informed us: “My Name is Sarah and in 2016 my 14 year old daughter died from SUDEP. Every Friday at work we have a dress down day and each month these Friday’s raise money for different charities, without realising that SUDEP Awareness Day fell in October, I set up SUDEP Action as October’s charity for the month.  When I realised that the awareness day was on the 23rd October, I planned a bake sale to raise even more funds and awareness. But the date changed when I was made aware that many staff would be off work, due to school holidays so the event happened on Halloween!” 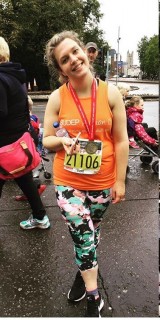 Rosie Kempson completed the Cardiff Half Marathon in memory Sally. She informed us:  “One of my friends Sarah, lost her sister, Sally at just 25 to SUDEP last year. I saw first hand the devastating affect it had on my friend and her family but also all the amazing support they received from SUDEP Action. I decided to run the Cardiff half marathon in support of my friend, in memory of Sally and to raise awareness of SUDEP, a horrible and cruel circumstance that could potentially be avoided.” Although it was a massive challenge for me, I had Sarah and her dad cheering me on the whole way, through training, constant encouragement and cheering me over the finish line even though they were both running too!”

Thank you and well done to all our October fundraisers. Our free bereavement support service and our vital work in epilepsy death prevention, is there - thanks to people like you. You help us to save lives and make changes. We really appreciate your help.