21st Nov 2016
A place to thank, appreciate and celebrate our fundraisers.

We had some brilliant fundraising  in October.

Those of you who live in Bournemouth may have spotted Katie Kenchington in her superb bright outfit running 5K in memory of Simon Groom. Katie commented: “I decided to take part in the 5K run at Bournemouth Marathon Festival on October 1st. I was doing this in memory of my uncle, Simon Groom, who tragically passed away in 2006 at the hands of SUDEP, leaving behind his pregnant wife and young son. I became injured 4 weeks before my run which meant I was unable to completely run 5K before the event itself. I managed it in a respectable time of 39:30 and I felt great!”

Vanessa Nicolson donated her fee to SUDEP Action for her appearance at the first Cranbrook Literary Festival, where she spoke about her memoir, Have You Been Good? (Published by Granta in 2015). The book was prompted by the death of her daughter Rosa, who had epilepsy and died from drowning following a seizure while swimming in the family pool aged 19. Pictured is Vanessa Nicolson (seated) with the organizers of the Cranbrook Literary Festival (photo credit to Dave Wilson).

Sarah Cooper and her Dad Owen Cooper took part in the Cardiff Half Marathon in memory of Sally Cooper. Sarah commented: “My Dad and I ran the Cardiff Half Marathon on 2nd October in memory of my sister Sally aged 26, who passed away 31st July this year. We chose to raise money for this charity as Sally was diagnosed with epilepsy although the cause of death has not yet been determined. We were not aware that someone could die from epilepsy. Sally raised money for various charities and so we decided to fundraise to honour her memory and to raise awareness of death in epilepsy." 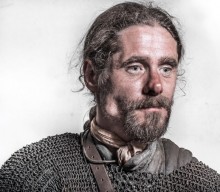 Lara Nelemans organised her own sponsored walk in memory of her partner Damien. Lara informed us: “It went very well. The weather was beautiful for 3/4 of the walk and then the heavens decided to open, but my friend Scott and I were only about half an hour from home so we just plodded on.” Damien was a historian and a proud Saxon reenactor so the feature picture is a photo of Damian looking like he was from the year 450. 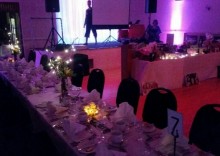 Toni and Taryn Slade organised a charity evening event in memory of Nathan Slade, Toni’s son and Taryyn’s twin brother. Toni commented “A lot of love in the room. A beautiful atmosphere with everyone dressed to the nines. This event will help bring more awareness to the fore for SUDEP Action, which is really important to get the word out there for the charity and the people who have been affected by this, and on behalf of all the SUDEP Angels who have lost their lives to this monster we don't yet fully understand but manages to take our loved ones lives suddenly, unexpectedly and prematurely. 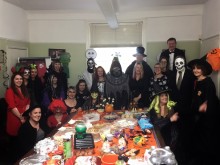 Anne-Marie Lawrence, and the staff of Cunningtons Solicitors held a spooky fundraiser in memory of Anne-Marie’s daughter Tazmin Brown: “I lost my 19 year old daughter to SUDEP in October 2015.  I organised a Halloween dress up day at my workplace to raise money and awareness for SUDEP Action.  We also had a buffet lunch and a pumpkin carving competition - the day went very well and lots of people dressed up, even the Partners and the buffet was very popular.  A lot of fun and laughter all day, I think my daughter would have enjoyed it and approved!” 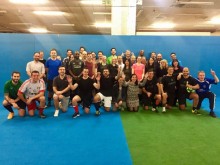 Learning Technologies Group plc have been fundraising in memory of their colleague Edward Hughes. Staff member Hannah Day informed us: “In March our dear colleague, Edward Hughes, sadly passed away during an epileptic fit. Edward was passionate about football and supporting charities so we combined these passions to celebrate his life, raise money for SUDEP and raise awareness of epilepsy.  Employees from across our four UK offices got involved with running fundraising events which included a 5-a-side football tournament, a fantasy football league, a big raffle and cake sales. The fundraising was a great success and we're proud of the legacy we've created in Edward's memory.”

Anthony Hick raised funds in memory of his son Owen Hick: “Kingswood Rotary Club have an annual wine and cheese evening at a member’s house. This year some 40 of us packed into Arthur’s house and as I’m President this year, it was my opportunity to have a very pleasant social evening, raise money and promote SUDEP Action. Most had never heard of SUDEP, but many later shared stories of people they knew who had epilepsy, so I was glad I went armed with leaflets!” 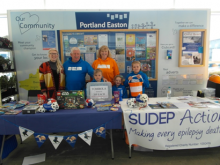 The Dench Family held a fundraising day at their local Tesco Store in aid of SUDEP Awareness Day for SUDEP Action and another charity. Sally Dench commented: “The Grandchildren were very keen to be involved and Georgia 10,Charleigh 7and Emilie 6 all spoke in their school assemblies about the Charity fundraising day which was very brave of them because they know all our fundraising is in memory of their Uncle Dan who died from SUDEP in 2013 and they miss him very much. We had a lovely day and like to think that as well as fundraising for the charities, we were also able to pass on some vital information to several of the members of the public who had a family member with Epilepsy. As the grandparents, we were very proud of our grandchildren and we know their Uncle Dan would also be so very proud of them. We feel their knowledge of SUDEP will go a long way in being the future of raising SUDEP Awareness.”

Thank you and well done to all our October fundraisers. Our mission to support the bereaved and help prevent epilepsy related deaths is funded by your generosity. We really appreciate your help.

If you have been inspired to fundraise by this blog please get in touch, we would love to hear from you. Email [email protected].

If you have taken part in a fundraising event in October and would like to be included then it is not too late. Email [email protected] to let us know.