21st Dec 2018
A place to thank, appreciate and celebrate our fundraisers.

Sophie Pierce informed us: “I’ve always loved the Radio 4 programme “Desert Island Discs” and had the idea of putting it on as a live show to raise money for SUDEP Action, and in memory of my son Felix who died last year aged just 20. My ‘castaway’ was the award-winning author Philip Reeve whose novel, Mortal Engines, is coming out as a Hollywood movie in December, made by the team responsible for the Lord of the Rings and the Hobbit films. We called it “The Vinyl Countdown” had had live music and video, as well as listening to songs from various artists including David Bowie, Talking Heads and Tom Waits. “ 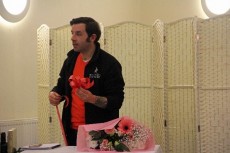 Soroptimist International Heswall & District are raising funds in memory of Carolyn Sandland. President Maureen Sayer gave us details of their latest event: "Florist Nathan Sayer from Hare and Hatter flowers attended Soroptimist International Heswall & District Speaker evening. He demonstrated how to make four beautiful Christmas Floral arrangements, which were then raffled off to raise funds for SUDEP Action. He then donated his speaker cheque as well. A delightful evening was had as the ladies were entertained initially by Nathan’s journey to becoming a florist and then visually as the arrangements took shape. His hints and tips on what to do were well received". 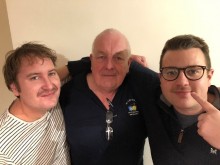 November is the season of growing moustaches. A fab team of three took part in ‘Mo-vember’ in memory of Elaine Rostron. Jack Harrison informed us: “During the month of November both Nathan, Jim and I raised money for SUDEP Action by growing moustaches. It was a painful realisation that I can barely grow a ginger caterpillar, but it was for a great cause! I was overwhelmed with the level of support from our friends, family and colleagues. Furthermore, I am really pleased that we raised so much awareness for a topic that not many people know a lot about unless they have already been affected.”

Thank you to everyone involved in fundraising for SUDEP Action in November. It is thanks to you that we can support bereaved families and try to prevent epilepsy deaths.

If you have taken part in fundraising in November and would like your event included in this blog please email [email protected].