15th Dec 2016
A place to thank, appreciate and celebrate our fundraisers. 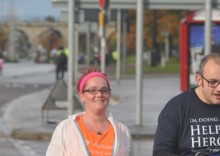 There was no stopping Sarah Lou Waddingham who took on The Abbey Dash 10K in memory of her sister Vicky Leaning. Sarah informed us: “The Abbey Dash was excellent despite cold weather and rain and a bit of a wind, I managed to finish in 1:30:39. The day was made so much more special as it was my birthday, and also my partner who I ran with, and pushed me as much as he was allowed, proposed to me on the finish line.”

The Leeds University Women’s Hockey Club held their annual race night in memory of Emily Sumaria. Rachel, Emily’s mother, attended the event. She commented: “Bharat & I were so pleased to return to Leeds and join in the fun at the Race Night run by the university hockey girls. The night was a great success and the raffle was the cause of great excitement thanks to the donation of a week in a ski chalet by Rosie Adkins. The girls were so welcoming and it meant so much to us that they continue to support SUDEP Action and keep Emily’s name alive.” 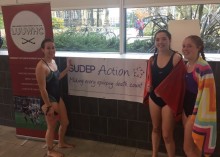 The LUUWHC also took on their annual Channel Swim Challenge in memory of Emily Sumaria. This year they doubled the toughness by swimming the equilivent of two English Channels! 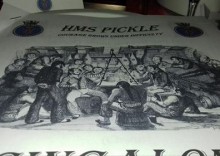 A Pickle Night was held in memory of Saranne Butler. Margaret Neilson, Saranne’s mother informed us: “The Warrant Officers and Senior Ratings of the Royal Navy hold Pickle Night around November 6. It is to commemorate the event in 1805 when Lt John Richards Lapenotière, Captain of HMS Pickle, charged with the delivery of the despatches containing the news of the victory at the Battle of Trafalgar and of Nelson’s death to William Marsden, Secretary of the Navy, announced with the simple words, “Sir, we have gained a great victory. But we have lost Lord Nelson.”” 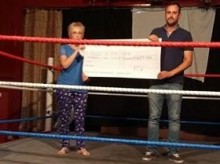 Also in memory of Saranne Butler, Steven Boyce raised funds through wrestling! He informed us: “At the social club where I work we have a wrestling event at the end of every month. The organisers approached me with the idea that I take part, to which I agreed if we could raise money for SUDEP Action in memory of my aunty Saranne Butler. The night was a sell out and after fighting the nerves and the wrestlers (who were slightly younger and a lot fitter than myself) a great night was had by all, and the bruises were worth the money being raised. So a big thank you to future championship wrestling and roll on the next one!!” 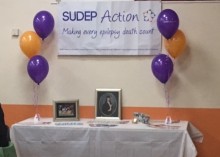 Martin and Tina Larkworthy hosted a quiz night in memory of their daughter kim. Tina commented: “Our daughter Kim passed away ten years ago on 7/10/2006 aged 23. She had just one seizure previously. We decided to organise a quiz night to mark the anniversary. On 26th November, the day after Kim’s 34th birthday, over sixty people supported us on a fun evening enjoyed by all. Several asked us to make it an annual event. Others were so moved by our story, they have offered to run marathons for SUDEP in memory of Kim. RESULT!!!!” 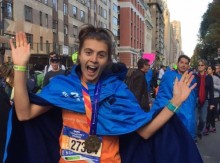 Sophia Cartmell ran the New York Marathon in memory of Emily Sumaria. Sophia informed us: "On November 6th I ran the New York Marathon for SUDEP in memory of Emily Sumaria. It was an incredible event and it was great to take part in the largest ever marathon! I ran alongside 54,000 runners on a course that went through five different boroughs: Staten Island, Brooklyn, Queens, The Bronx and Manhattan. The day was amazing but also challenging, and knowing I was running in memory for Emily and for such a great charity certainly helped me through the tough times." 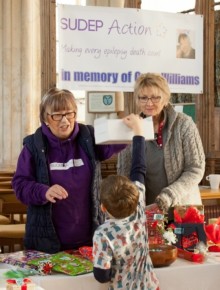 Ro Williams, who lost her son Owen to SUDEP in 2014, and her friend Val Boast, held a Christmas Present Tombola stall at the Blythburgh Church Christmas Market on 26 November. Another friend had wrapped up all of the prizes so that the stall looked amazing and created a lot of interest.  Ro said: “We achieved all three of our aims, to raise money for SUDEP Action, to raise awareness of SUDEP and to keep Owen’s memory alive.”

Thank you and well done to all our November fundraisers. SUDEP Action exists to prevent unnecessary deaths from epilepsy and to provide support for the bereaved. It is thanks to you that we can carry out the work that we do. We really appreciate your help.

If you took part in a fundraising event in November and would like to be included in this blog, please email [email protected].