The Mountain Men consists of three friends that met at secondary school, James Gough, Sam Hiner and Tom Perkins. We all grew up in Northamptonshire and now live in London, but we have remained very close.

Whilst at secondary school, a friend that was incredibly close to all three of us died suddenly. Jack Cheatley had been diagnosed with epilepsy, and SUDEP was found to be the cause of his death. We had talked about doing something for Jack and for SUDEP Action, but as the time passed by we hadn’t come up with something that would do justice to this cause.

As with all great plans, this challenge of ours was devised in the pub. We began discussing ideas and as the beer flowed we became more and more ambitious. What started as a large hike of some kind turned into a 24 hour 3 Peaks Challenge! We reached out to the Charity after almost immediately raising a good amount of money through our JustGiving page.

So, what can we say about the challenge itself? Well, it was easy. Could have done it again immediately…. Is what none of us have said since about the Challenge. Ben Nevis was the first peak and this was tough, but by the time we had returned to the base of the mountain we were still filled with fresh faced optimism. The following six hour coach ride to the second peak soon eroded that. Unfortunately, what followed this coach ride was an overnight summit of Scafell Pike. We’d never hiked in darkness, so at this point we were pretty uncertain as to how the rest of the challenge would go. Some hairy moments ensued as rocks appeared from nowhere (apparently) but we made the summit within the time frame. 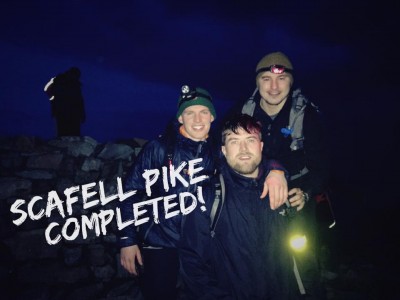 Struggling with lack of sleep, we were met at our final peak by a fresh guide who, we were informed, would lead us up Snowdon at quite a pace in order to complete the challenge within the 24 hour period. ‘Quite a pace’ is a major understatement and one which left two of us (not naming any names) completely exhausted and almost lifeless with just under an hour’s hike left to go.

Along the final stretch however, everything changed. I don’t know whether it was adrenaline or simply sheer elation that we wouldn’t have to climb again but we jogged the final leg to the summit to complete the challenge with no more than 10 minutes to spare! Our mood completely switched from our mid-summit dejection to pure satisfaction. It was surreal standing at the summit and coming to terms with the fact that we had completed this monumental challenge. We were almost delirious. It is quite difficult to describe that feeling. With this new found energy, we bounded down Snowdon as if we hadn’t been awake solidly for 24 hours. Summiting one mountain alone is a great achievement, but as we were checking off 1 then 2 then 3 peaks in such a short period, I think the feeling of achievement was amplified. 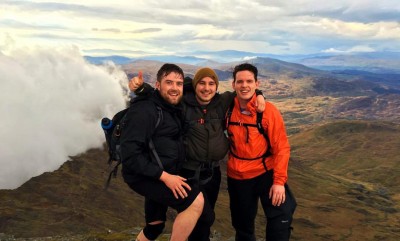 The whole experience though has been incredible. Not only completing the challenge together, but in the lead up to the challenge. We were all deeply motivated by the support we’d received from our friends and family, and the fact that we were doing the challenge for our friend. We did a lot of fundraising and the support we've received from our friends and family has made the whole experience so much more rewarding than we thought it would be when we were sitting in the pub coming up with the ideas. The generosity of people has been amazing, whether it was donations of time or money. The lengths people have gone to in helping us with this challenge really has made this experience so huge for us.

We are so pleased to be able to give such a good sum of money to SUDEP Action. We initially set a target of £1,000 but thanks to the incredible generosity of our supporters, we broke through multiple targets on our way to our final amount. We really hope that this money is useful to SUDEP Action in all their endeavours, and we hope to continue to raise more in the future.

We would like to thank everyone who donated and got involved. We would also like to thank Bryony and Yvonne Gough and Jackie White for your help organising our fundraiser and the raffle. This would not have been anywhere near as successful as it was without you three. Thank you all for your time and patience.