16th Jun 2016
A place to thank, appreciate and celebrate our fundraisers.

May was packed with some brilliant fundraising for SUDEP Action. This is what some of our supporters got up to. 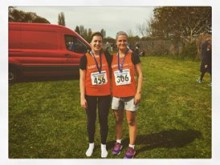 Ali and Lucy completed the Richmond Half Marathon in memory of their friend Emily Sumaria. Ali informed us: “It went well. We managed to finish in about 2hours and 15 minutes. It was a really nice and sunny day so we really enjoyed it and I think all the training payed off.” Roger and Sandie Scrivens held a quiz night in memory of their daughter Becky.  Roger commented: “It was an 'all go' evening with 100 people to be fed and 'watered' and quizzed. But, we got through it and special thanks to Sandie who, having plated up all the food and performed manifold ancillary duties, then set off for Guildford at 08.30 the next morning to run a successful SUDEP Action Coffee Club Meeting. Boy, did she enjoy the BBQ we had that Saturday evening!!!” Jo Johnson, James Capper and Charlotte Parke ran the Lincolnshire Half Marathon to help raise funds and awareness in memory of Nathan Slade. Toni Slade (Nathan’s mother) informed us: “It was a beautiful day and all our runners have said they will be taking part and running for SUDEP Action again in next year's event!” Toni Slade

Also in memory of Nathan Slade, Frankee White held a Zumbathon fundraiser. She commented: “We were over whelmed by the turn out for our three hour Zumbathon event held in memory of Nathan Slade; whose life was taken too soon only nine months ago. Everyone that attended raised the roof and danced their hearts out. We had three amazing instructors leading the day and a fabulous raffle with prizes from local businesses. From the bottom of my heart I cannot thank you enough; we could not have done it without you all! I am currently starting to think about organising a fun day for SUDEP Action. I've really enjoyed organising this fundraiser and I can't wait to do more to help.” 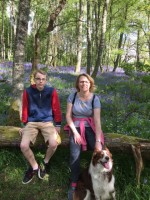 Lesley & George took part in a 100 mile challenge in memory of Victoria Riches. Both strived to walk 100 miles in one month and competed to see who was first. Lesley commented:  “George and I enjoyed our competition against each other, he had a Fitbit and I have an app on my phone so I only used that when I walked the dog clocking up the miles. George wore his Fitbit all the time at school etc so he got his 100 miles before me but it was good fun and for a good cause for Georges auntie Vicki.” 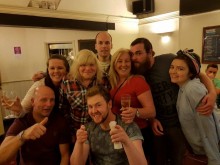 Daisy Watford held a quiz night in memory of Samuel David Watford. She informed us: “I held a quiz night to help with my fundraising efforts for the Edinburgh Marathon in memory of my cousin Sam who passed away aged 14 in 2016. The event also involved a raffle and we received some great donations for prizes from local hotels and organisations. It was a great turn out and a fantastic evening which has made my training and fundraising experience even more memorable.” Becky Finch and Sean Toole ran 10K in memory of Sean Toole. Becky informed us: “My Uncle Sean and I ran the London Vitality 10k to raise money for SUDEP Action in honour of my Uncle Mark Toole. Mark passed away in 1995 and his family and friends miss him dearly. We really enjoyed the race and both had our best race time to date (both under an hour!). Our next goal is a half marathon!” Anna lee also took on a running challenge, running in memory of Mike Garrad. She commented:  “I completed a 10K and a 4 mile race in memory of my cousin Mike Garrad who died in 2008 from SUDEP aged 28.  I felt I wanted to do something that, for me, was out of my comfort zone and running was it!  Mike and I used to run round fields together as kids, and then run round nightclubs trying to find each other as adults so it seemed apt! It made a good challenge and something that will stay with me, like my memories of Mike.  I would like to thank everyone who donated, and my little cheerleading squad that was there on the day, well done team!” 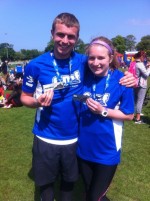 Gareth Allen and Gemma Thompson completed the Edinburgh Marathon in memory of Keir Jackson. Gareth shared with us the details of their challenge: “The Edinburgh Marathon went very well for Gemma and myself at the end of May. I finished in a time of 3 hours and 23 minutes and Gemma finished in a time of 3 hours 44 minutes. It was made easier to run with it being a very cloudy day, however at the very end of the run the sun came out to shine on us which was a very nice way to finish! We both felt very privileged to be able to run this marathon for SUDEP and raise money and awareness for this great charity.”

SUDEP Action staff Katie and Juliet had a brilliant time meeting  Natalie Treadwell as she took to the skies and braved a Wing Walk in memory of her sister Kathryn Treadwell. Katie said: “It was really heart-warming to see the support that Natalie received from her friends and family who had turned up to support Natalie. Natalie was very brave to take part in the wing-walk, it looked very cold and terrifying.”

Lynn and Billy McGoff held a table top sale in memory of Sam Ahearn. Lynn shared with us details about their triumph despite facing awful weather: “We did a table top sale on Saturday 21st May (Epilepsy Week) in Memory of our Daughter Sam. I have got to be honest and say it was a dreadful day with non-stop rain. But despite this, the day still went ahead and we had lots of people asking us about SUDEP and still raised money.” A tough team of walkers took on the Keswick to Barrow Challenge in memory of Victoria Hannah. Victoria’s sister Charlotte Roxanne informed us: “On the 8th May, myself and 5 others made up a team that decided to take up the challenge of walking the gruelling 44 miles in the 50th Keswick to Barrow charity walk. As SUDEP is a very important charity to my family, and me we decided as a team that this would be the charity that we walked for. It was an early start for us all as we set off on our long journey home. It was a lovely sunny day as we walked through the beautiful scenery of the Lake District. We were lucky to be followed all the way by a brilliant support team of my parents, who met us at every checkpoint with all of the supplies we would ever need to get through the day. It was a very long and hard walk, with a lot of struggles along the way, however, finally, after a gruelling 44 miles, and 13 hours of walking we crossed the finish line as a team and celebrated our success!” Pictured left to right: Michael While, Charlotte Hannah, Paul McKenna, David Gay, Victoria Cochrane and Grant McKenna.

Richard Cartwright took part in the Great Manchester Run in memory of Emily Cartwright. He informed us: “It went really well thanks. I managed to get a personal best of 44:26. I was running in memory of my cousin Emily Cartwright who sadly passed away last summer from sudden death from epilepsy aged 34.  I just wanted to raise more awareness of the condition really as I'd never heard of it or known anything about sudden death from epilepsy at the time.”

Thank you and well done to all our May 2016 fundraisers. We really appreciate all that you do to help us.

If you have taken part in an event in May 2016 and would like to be included in this blog please get in touch. You can email [email protected].