24th Jun 2019
A place to thank, appreciate and celebrate our fundraisers.

A mega mix of fundraising activities took place in May. 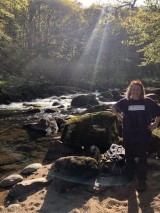 Sophie Pierce, whose 20-year-old son Felix, died of SUDEP in 2017, organised a marathon walking and wild swimming weekend on Dartmoor to raise funds. She told us “We held the second “Darty Dozen” – twelve wild swims on beautiful, rugged Dartmoor – in memory of Felix and to raise money for SUDEP Action. Around 50 people joined in the walks and dips over the May bank holiday weekend, enjoying some stunning moorland scenery.  We camped at an idyllic farm and all enjoyed a party on the Saturday night. There were lots of happy faces and laughter as well as some rather tired feet by the end!” 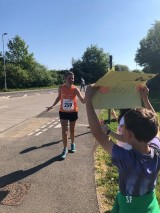 Nicola Chalk ran the Bracknell Half Marathon, in memory of Nick Flanagan. She informed us "A friend Nick and I watched the Half Marathon making the decision we would run it together the following year. Unfortunately, Nick died a few weeks later. I have just completed 13.2 miles for the second time, again in Nick's memory raising money for this very worthy cause. I really feel inspired to keep going, knowing the reasons why I am running it, even when I find it so tough and not being a natural runner at all. No family should ever have to go through what Nick's have by his sudden death." 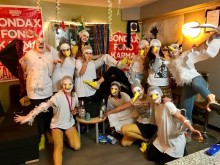 The Leeds University Union Women’s Hockey Club held an entertaining fundraiser, in memory of former team member Emily Sumaria. Community Sec Geni Carter, said “The Old Girl Auction gives all the girls in their second, third, fourth or even fifth years (some people just don’t want to leave university) the chance to be freshers for the evening again. By reversing the traditional roles, the freshers donated to SUDEP Action, to be able to tell the old girls what to do. This involved lots of silly games, challenges, face paint and costumes for a highly enjoyable end of year social all while raising money for SUDEP Action!” 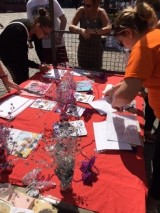 Melissa Cook and mum Teresa made the most of their market stand raising awareness and funds in memory of Megan Cook. Melissa told us "People were asking questions and taking leaflets etc. too, so it was a brilliant way of raising awareness! If I have a market stall again (which I could be doing soon) I’m more than happy to do what I’ve just done. There was also a lot of people that came to visit us from out of town, who weren’t aware of SUDEP, even still now, after all the work that we have done on social media people are still asking what SUDEP is!”

Melissa also arranged a fabulous children's walk in memory of Megan. “We did the walk and wow I don’t have any words that will cover how perfect it was, just wish we wasn’t doing it for the reasons we were. But it was well and truly amazing, all children were brilliant not one moan, cry, falling out, at all! They walked just over two miles, it was very warm but they loved it! It was emotional just seeing everyone who supporting us.” 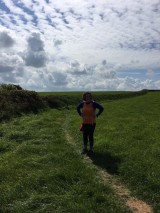 Francesca Haincourt took on a tremendous challenge raising funds, in memory of Maisie Tothill.  She informed us “I decided to take on a 78-mile challenge along the north Devon coast, in just three days in May (that’s a marathon hike a day) with almost no training. Googling North Devon Coast, I learnt that it is characterised by steeply sloping narrow valley systems....trust me, this put me through my paces. I did this in the memory of Maisie Tothill, whose sudden passing on Saturday 26th January 2019, at only 22 years of age, due to an unexpected seizure in her sleep, has left a huge hole in our lives. Maisie had been suffering from occasional seizures for three years and was undergoing further diagnosis to pinpoint the cause. Maisie has been my step-sister over the last eight years. I witnessed her successfully smash her A-levels and go on to graduate from the University of Leeds in Politics. She was set on making a real difference for in the world and was in the middle of an internship focusing on 'Ethical Investing’.”

Melissa Freeman and friends climbed Snowdon in memory of their friend Charlotte Iceton. Melissa informed us “We have been raising money for this charity as a close friend sadly lost her life. We thought of an event to do but wasn’t sure we could do it. We asked around our friends, and seven of us in total agreed to do it. To walk Snowdon was our challenge and we did it in five hours. We also had a jäger bomb at the top as this was Charlotte’s favourite drink.”

The Dorset Walking and Social Group held their annual charity walk, in memory of John Burgess. Group member Helen Scott told us “We did a 14 mile walk from the chain ferry at Sandbanks to Swanage, and back along the coast path, in memory of one of our walkers - John Burgess - who sadly died in 2017, from sudden death in epilepsy. We have done a charity walk every year since his death, and the members always give very generously. We all know what a good cause it is going to.”

Brothers Stephen & Chris Pugh ran the Windermere Marathon in memory of Samuel Lawrence. Stephen informed us “The journey started as a personal challenge, to do a marathon at 40yrs old, after few injures over the years. The picturesque Windermere marathon looked perfect with nine months of training time to prepare. It felt right to do it for a good cause as well and having seen the impact through the loss of my wife’s cousin, I decided to run in his memory and raise money for SUDEP Action. I roped my brother in, and after training hard, we completed the marathon in May 2019. I’d definitely recommend running to raise money, whatever distance you do, as it is a great way to get sponsorship and stay fit!” 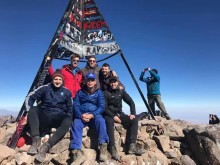 A tough team from Aviva Investors raised funds in memory of Maisie Tothill. James Tothill from Aviva Investors wrote "On the 20th May a team of 14 from Aviva Investors climbed Mount Toubkal in Morocco, at 4,167 metres, it is the tallest mountain in Atlas Mountains ,to raise Money for SUDEP action in memory of Maisie Tothill - Maisie was truly loved by everyone who knew her and everything was all set for her to have a wonderful future, Maisie passed on 26th January 2019. The team had a good mix of ages and fitness and it took them 3 days to complete the task, lots of blisters aching limbs and altitude fatigue. They pulled through, what a team! The team was led by the Leadsom Brothers  Jeremy and Simon. We would like to thank all the staff Aviva, clients and friends who supported the fund-raising effort."

Julie Smith ran to raise funds in memory of Colin Johnson. She told us “I completed a 5K on the 25th May and a half marathon on the 26th May for SUDEP Action, in memory of my best friend (who I call my brother) Colin Johnson, who lost his life to a seizure due to epilepsy. The runs where challenging and I was hurting so bad, lol. But it’s worth it to raise awareness for SUDEP Action, and to help with the grief we all encounter.”

A very big thank you to everyone who took part in fundraising for SUDEP Action in May.