28th Jun 2017
A place to thank, appreciate and celebrate our fundraisers.

Great efforts were made in May. Read on to find out what some brilliant supporters got up to. 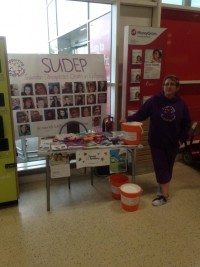 Caron Robinson was busy fundraising in May.  Her first May event was a fantastic awareness and fundraising stand at a local supermarket. She informed us: “I spent a day in our local store, raising funds and lots of awareness of SUDEP, in memory of Nikey. I heard of 2 losses to epilepsy (possible SUDEP) and many with epilepsy, who had no idea about the risks. All walked away with more awareness than when they walked into store. My aching feet and back was worth it."
Later in May Caron hosted a fun cabaret/disco night. We hope that she has now had time to recover!

Helen Costin reached week four of her "goody" free year in memory of Georgie Butler. Helen commented: "I have now gone four weeks and two days without eating sweets, chocolate, cake or biscuits, which I’m doing to raise money for SUDEP. My goal is to give these things up for a whole year! Whenever it gets hard, I remember Georgie and how brave and strong she always was, and how I want to do this to help people like her. One day at a time, I am determined to do this in her memory!" 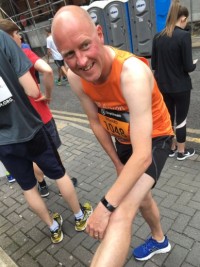 Richard Cartwright ran the Manchester 10K in memory of Emily Cartwright. He informed us: “It was the third time I've completed the Manchester 10k and the second year in succession I wanted to fundraise for SUDEP Action.  My cousin Emily Cartwright, sadly died at the age of 34, in 2015 from sudden death from epilepsy so it was brilliant to raise money again for such a worthy cause.  I managed to run in 44:56 minutes which was 30 seconds short of my personal best (PB), so I was very happy indeed!  I hope all those who took part in aid of SUDEP Action can raise as much profile and awareness for the charity.”

Thank you to all our amazing May fundraisers.

If you took part in a fundraising event in May and would like to be featured in this blog then get in touch via [email protected] or call 01235 772850.