On the 9th of May, my friends and I completed a Rat Race challenge in memory of our friend Alex Ford-Robbins. Alex was a key member of our Grafham and Smithbrook Cricket Club.

My team mates Kenny Eichen, Grant Williams and Jason Turner had taken part in the Rat Race three years ago and despite stating that they would never return, the lure of competing in the world’s largest obstacle race was too much.

To prepare for the race, we ran most weekends and entered many 10km trail runs over the year. We trained to achieve overall good fitness levels to help us get through because a race like this is not something that you can specifically train for. We became somewhat hooked on trail and mud runs. The phrase 'middle aged men in Lycra - MAMILS' could apply to us, although the Lycra should be replaced with mud! 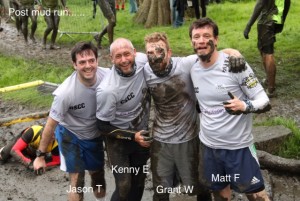 We arrived for the race on the Friday before the event and spent a sleepless night camping. On Saturday morning, getting breakfast down was a struggle; we had our nervous breakfast and were off at 9:45am.

The race involved a 20 mile run with 200 obstacles, ranging from hay bales, monkey bars, lake swims, log carries and mud crawls. There was a 100 metre plus run of monkey bars, which only a handful of the 8000 competitors completed.

Just before the finish line, we had the final two 'walls'. These were huge scaffold constructions boarded over and about 4 or 5 levels high. After a punishing 20 miles of running and obstacles, we had to stand on each other's shoulders to climb up each level. This was tough but we all managed to climb over them and cross the finish line as a team.

We felt so relieved at the end and happy to have raised around £1000 for the SUDEP Action WADD project.

I enjoyed the race, although my body would disagree because the last 4 miles or so hurt. The whole experience is great fun and I would encourage anyone thinking of doing the race in support of the charity to go for it.