26th Apr 2019
A place to thank, appreciate and celebrate our fundraisers.

Thank you to everyone who raised much needed funds in March. Keep reading to find out what some brilliant SUDEP Action supporters got up to. 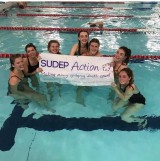 The Leeds University Union Women’s Hockey Club support SUDEP Action following the loss of team member Emily Sumaria. Community Secretary, Geni Carter informed us: “LUUWHC are now almost half way through this year’s fundraising and are so pleased with how much has already been raised for SUDEP Action. We’ve had someone swim the entire length of the Channel herself, our annual Race Night, a pub quiz and we introduced a Karaoke Night which definitely proved to be a fun night for all. The Yorkshire Three Peaks Challenge, Leeds Half Marathon and many more fundraisers are still to come, we can’t wait to raise even more!”

Teresa Cook, Simon Cook, Erin Theobald (RM Manager) and Melissa Cook raised funds in memory of Megan Cook. Teresa commented “A raffle was held in memory if Megan Cook who passed away to SUDEP August 31st last year. The raffle enabled us to also raise awareness in and around the Lincolnshire area. We miss Megan every minute of every day.”
From left to right is Simon, Erin, Teresa and Melissa.

Regular quiz host Valerie Bates kindly supported SUDEP Action at one of her events. She told us “Having lost a brother to epilepsy, two of the Club's barmaids asked me if I could allocate one of my monthly quizzes to SUDEP Action. I had never heard of this charity!! However, after learning of its work from people that had, sadly, had cause to receive its help, I was only too delighted to agree! I hope that, in this small corner of Essex some folk will now be aware of its valuable work. Good Luck.”
Pictured are the winning and losing teams with Valerie in the middle.

Brilliant Purple Day fundraising took place in memory of Samantha Ahearn. Lynn McGoff, Sam’s mum informed us “Our Purple Day consisted of Alice’s school, St Monica’s (Sam’s High School) putting together pay £1 to wear your own purple clothes, they also shown a video about Epilepsy in the morning. They went to the trouble of asking Alice if she would be ok with that beforehand. I also done my own event in work with a Tombola and cake sale. I done a blog which someone from another office 40 miles away read and wanted to do one also.”

Rebecca Boulton made the most of Purple Day and her hobby by hosting a boxercise event. She detailed “I’m 43 and I was diagnosed with epilepsy six months ago after having two seizures out of the blue (the 2nd was in the car whilst driving home from work). I decided to try and find a positive from this. Throughout my initial diagnosis when I had to have all the tests etc, going to my local boxercise class was my release. I decided to use this to my advantage and on #purpleday I was sponsored to take over the class for the evening (no easy task for anyone!!!) We’ve raised a phenomenal amount of money and awareness for this cause of which I am extremely proud and thankful for having such great family and friends who helped along the way.” 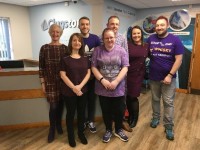 We are Clugston Construction Limited’s charity of the year and in March they held a Purple Day event. Claire Drayton, Marketing Services Officer said “We had a great time on Purple Day raising funds for SUDEP Action, our chosen charity for 2018/19. Team members got into the spirit of things, a couple even dying their hair purple.  Upcoming events include an Easter raffle to win a Samsung Galaxy Tablet and a charity plant sale.” 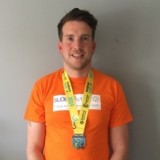 Gareth Higgins ran in memory of his friend Darren Ryan. Gareth commented “I lost a friend due to epilepsy in 2018, so I decided to take on a couple of challenges to raise money for SUDEP Action. The first challenge was a Half Marathon. It’s the first half marathon I have ever taken part in and after 3 months of training, somehow, I managed to finish with a time of 1hr 44mins. It was tough keeping up the pace, however realising what I was raising money for helped me through the race.” 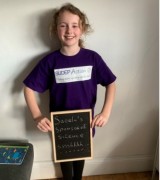 Chatterbox Saorla Kearney had a great idea of taking part in a sponsored silence in memory of Shane Corrigan. The silence was for three hours and taking involved consequences such as a cream pie in the face, a bite into a lemon slice, ice cold water poured over her head, an egg smashed on her head or herself wrapped in toilet paper! Donors could also buy consequences! Saorla commented: “It was really good, I had so much fun. Some of it wasn’t that nice and sometimes it was hard to do. My head teacher has asked me to talk about it at my school assembly next week. I’m really glad I got to make some money that will help people.” 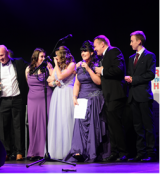 Tanya Russell hosted her second ball event in loving memory of her daughter Johdi. She informed us “So last year was big but this year even bigger. I had high hopes of achieving 300 guests (75 more than last) but smashed that vision with just over 400. I remember at one point standing on the stage looking out at everyone laughing, dancing, chatting all having a great time together - and realised they were all there to show their love and support to myself and my family all in memory of my beautiful Johdi.”

Shania Bamford raised purple funds in memory of her best friend Maria Zmarzlik. She told us “I raised money on Purple Day in order to support SUDEP Action after losing my best friend in August to SUDEP. I organised a cake/food sale at my workplace, it went so well and I’m proud that it came together how it did. Losing my friend is the hardest time of my life, and everyone who was close to her still struggle daily too. By supporting SUDEP Action, it gives an opportunity to raise more awareness on these issues and help fund research that could save lives.”

Thank you so much to all our fundraisers who made March an amazing fundraising month.