2nd May 2018
A place to thank, appreciate and celebrate our fundraisers.

Our fundraisers are amazing. This is what some of them got up to in March. 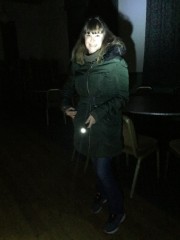 Holly Haskew visited a spooky location to raise funds in memory of her mum Jackie Haskew. Holly informed us: “I have suffered with epilepsy since I was 12yrs old  and 10 years ago I sadly lost my mum to unexpected death in epilepsy, which turned my life around dramatically. After suffering this pain and loss I wanted to make sure that I raised money to help others, raise awareness and also make my mum proud. I have often done fundraising nights at home on her birthday, however, this time I wanted to do something different and not well known. I spent a night in a haunted building doing a paranormal investigation in Masonic Guild Hall, which is said to be haunted with regular activity. I had lots of fun on the night and also felt some strange sensations, I was brave and offered to put myself up for any volunteering no matter how scared I was. I completed the night and also had an experience I will remember forever.” 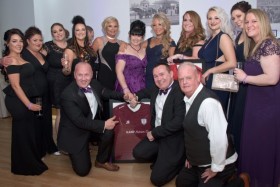 Tanya Russell made the most of her superb organisation skills and organised a ball in memory of her daughter Johdi Russell. “I had always dreamt of Johdi’s 18th birthday party and how special it would be, little did I know that the pleasure of organising it would be cruelly snatched from me. But then I realised ‘Yes I can’ and so I did. I organised The Purple Ball, it was to recognise Johdi turning 18 but also to raise much needed awareness of SUDEP. The Ball, held on The Grand Pier in Weston-Super-Mare, was an amazing night. Almost 300 family and friends attended we had a silent auction, a raffle, Scott Murray from Bristol City football club was the host, it was fantastic. The night was a massive success This will now form Johdi’s birthday ‘party’ every year now till I’m too old to organise it!”

Linda and Bruce Davis hosted a quiz night in memory of their daughter Ellie Davis who died as a result of SUDEP in 2010. On March 24th the fourth Percy Pig Quiz night took place at Christchurch Hall in Wanstead. The quiz master Graham Baker, from Woodford, lost his daughter Billye to SUDEP in 1996. The night was a great success and the church hall was full of friends and family once again. Linda and Bruce would like to thank everyone for their generosity.

If you took part in a fundraising event in March and would like to be featured in this blog then get in touch. Email [email protected] or call 01235 772850.