Home › Lucy Bidgood came up with the ‘Suck a Lemon for SUDEP’ Challenge, here is her story

Lucy Bidgood came up with the ‘Suck a Lemon for SUDEP’ Challenge, here is her story 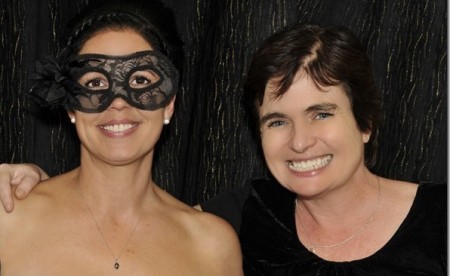 I lost my husband in July 2013. It was devastating, and like many, I had never heard of SUDEP. I was with my husband when it happened, so I knew what had happened, I just didn't understand it. After a few days, I did an internet search and came across the SUDEP Action website. Feeling the need to be proactive, I contacted The Epilepsy Deaths Register team at SUDEP Action to register my husband’s death.

I called the SUDEP Action bereavement support line and had a long conversation with Tracy Cowdry. She was wonderful and helped me deal with a lot of guilt I had over not being able to revive my husband. Tracy was truly amazing. For me, she probably helped me more than she will ever understand. Talking on the support line took a huge weight off my shoulders. I will say there will always be an element of guilt, that just goes with the territory of loss, but it was hugely lessened by Tracy.

In the beginning, my family took shifts in caring for my children and running the house.  As I grew stronger and as the shock wore off, I realised that my children needed me and my family needed their lives back. As time went by, there weren’t as many people as before.  During the day I was okay because I had the children to look after but the evenings became unbearable. Alone, every night I began to torture myself with the ‘If buts, maybes, should have, could have’s’. So I decided I needed something to keep me busy. 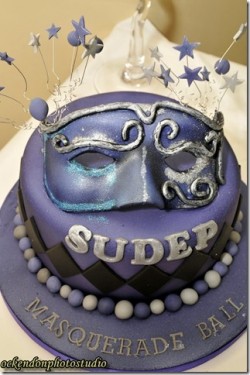 I got involved with SUDEP Action. I began fundraising and held a number of events, including a purple party.  My daughters approached their headmaster about a non-uniform day. I was grateful for the support but I started to notice that the same people were supporting us. So I decided to broaden my horizons to get money from new sources.

One day I decided I would hold an event. My friend Jess and I decided on a Masquerade Ball, partly because I had never seen one locally and secondly because I liked the message it sent, the hidden truth, the facts behind the mask.

I have used the advertising campaign for the Ball to get SUDEP out there with stories published in my local paper and an online paper. I realised that choosing a unique idea helped to get attention. Terrifyingly, the only people who had heard of SUDEP are people who know me. 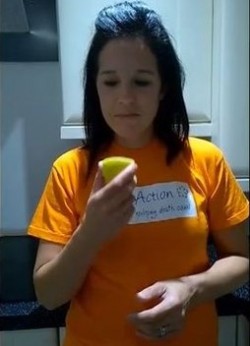 I decided to run an eating challenge to raise funds for SUDEP Action. They told me the first SUDEP Awareness Day was in process so I decided to launch the eating campaign in time for the day. I knew that humour sells so I tried to think of something that would be funny to watch; hence the ‘Suck a lemon for SUDEP’ social media campaign. The lemon was chosen because it was funny, and it was a kind of a slogan, the bitter truth. Although the challenge has not raised fortunes, I feel it created a lot of awareness.

I am always thinking of unique ways to raise awareness and funds for the charity. Next year I would like to hold something for SUDEP Awareness Day, to break a world record or something, as that would give us great tabloid coverage. I hope to inspire people outside the Epilepsy/SUDEP circle to get involved.

I am so very grateful for the support I have received from the SUDEP Action bereavement support team and want that to be available to everyone. I have learnt that I need to keep moving to enable me to keep going. Too much time to think leads to too much sadness and I have four children to consider. Talking to others who have suffered loss to SUDEP is a great comfort to me but I like to balance it with being proactive. SUDEP Action has introduced me to some wonderful people.

See galleries below for more photos from the Ball: