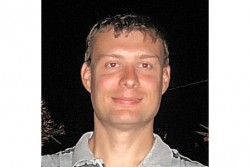 Katie Stephens walked 73 miles (116 Kilometres) through Spain to raise awareness of SUDEP Action in memory of her brother James Stephens.  The walk raised about £2300 for SUDEP Action, the only charity in the UK solely dedicated to preventing epilepsy deaths.

James, who had learning disabilities, was found dead in his bed on 26 April 2010 at the age of 31.  An inquest into his death revealed on March 18, 2011 that the cause of death was Sudden Unexpected Death in Epilepsy (SUDEP).

Katie and her friends Françoise Rui and Karine Milliot-Idoux embarked on the 73mile walk of St James Way in Spain to honour James memory and raise awareness of SUDEP.  They set off on their four and a half day journey from Sarria, walking St James way to Santiego de Compostela.

St James's Way is the Christian pilgrimage route to the cathedral where tradition has it that the remains of the apostle Saint James are buried. Katie explained that: “Hiking St James’s Way “El Camino de Santiago de Compostela” quite literally provided a way to keep James and his memory alive. It felt like James was accompanying us during on our adventure and inspiring us to keep on walking.”

“It was also very important for us to share the strong reasons behind why we had embarked upon such a poignant journey with our fellow walkers and to spread the word about SUDEP.”

Katie, Francoise and Karine walked between six and eight hours a day in temperatures reaching 32°C (89.6F).  They covered their journey in four and a half days. 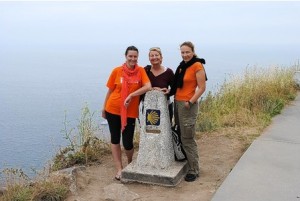 Katie suffered severe blisters after having to buy new walking boots just two weeks before the hike and not having time to wear them in.

Explaining their reasons for the walk, Katie said: “A way to turn the heartache of losing a loved one into something positive by raising money for SUDEP Action so they can continue to care for the bereaved and to work with families and professionals to make change.  A way to use research and awareness to get the answers that will save lives.”

“A way to inspire us and remind us that in life we must keep on walking even when the journey may seem like it is a continuous uphill struggle. With effort and personal sacrifices we can achieve our goals and sooner or later the way becomes easier. As they say along the Camino in Spanish “Sin Dolor no hay Gloria” “No pain no Glory”…

They described the moment they finally arrived in Santiago: "Seeing Santiago cathedral for the first time upon our arrival and realising that we had made it to the finishing line and reached our goal was so exciting. It was also great feeling that we had achieved our aim of keeping James and his memory alive, exceeding our charity fundraising target and raising awareness for SUDEP Action."

They hope the walk was one step towards ensuring that James’s death will not have been in vain and that further unnecessary deaths may be prevented.
Katie thanked her friends Françoise and Karine for their support, dedication and commitment to the cause.  She also thanked her friend Valérie for helping with the blog.

SUDEP Action Acting Chief Executive commented on these efforts saying: “Katie has done amazingly well raising funds and awareness on this walk, she even had our information translated into Spanish! Since the death of her brother both Katie and her mother Maggie have supported the charity and are determined to help change things, so that others don’t have to go through a similar experience.  As a charity we concentrate on what our members tell us is important and with the help of those like Katie and Maggie we will continue to push for change.”

You can still contribute to Katie's challenge at http://original.justgiving.com/Katie-Stephens1.