My name is Karen Dillon, I am 55 years old and live in Wilmslow in Cheshire. I am married with one son and three wonderful grandchildren. I work as a Prison Inspector, having previously been a Prison Governor. I like to keep myself fit and do so with gym work and my main love in life... cycling. I bought my first road bike three years ago and haven't looked back! 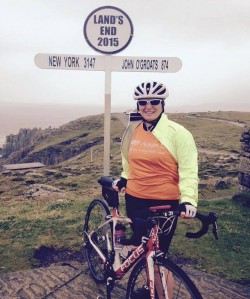 I am a member of the Team Glow, a women's cycling network in North West England. We had a social weekend and were challenged to complete the Land’s End to John O Groats (LEJOG) cycle ride by other women who completed the ride a couple of years ago. It has never been in my radar as something I wanted to do but I was instantly attracted by the challenge, at my age it was now or never!

I decided to dedicate the ride to my mother Sheila, who died last year at the grand age of 85 and my granddaughter Lauren, who sadly died too young at 21 from a severe epileptic seizure. My mother was a wonderful person and friend and she and Lauren inspired me greatly. They both left a huge gap and any event in their names had to be something epic and LEJOG fitted that bill!

Lauren was my step granddaughter. I first met her when she was 10 years old and my son Matt and her mother, Dawn got together. She was a bright, bubbly, child who grew into a beautiful young lady. She had her first seizure at the age of 14, a time when a young girl is just about finding her way in the world. Lauren never complained and I think her parents and I were more devastated by the diagnosis than she was. She carried on being a true inspiration to us all and never gave up her hopes and dreams for the future. Her death came as a shock to us all and left a huge gap in our lives. 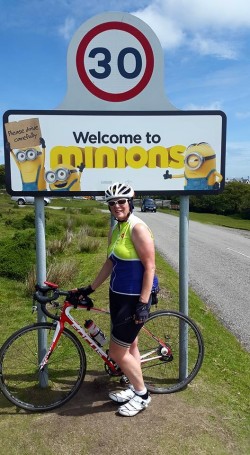 Preparing for the challenge started with a trip to Mallorca in April where I cycled every day for 11 days. This was followed in May by a 350 mile cycle from our home in Wilmslow, through Wales and by Ferry to Dublin. We then cycled from Dublin to our house in County Clare, South West Ireland. On top of that I regularly rode around the lanes in Cheshire and hills in the Peak District.

The ride itself wasn't easy. The first three days made us all wonder what we had let ourselves in for! Devon, Cornwall and Somerset are very hilly! The thought of Lauren and my mother kept me going. There were tears at the start as I set out as I remembered them. However, after that, things got easier as I got into the swing of it and felt stronger as each day was completed. We had a great support team, without which the ride would not have been possible, and the eight of us who took the ride are grateful to them for keeping us on track.

The ride enabled me to see parts of England, Wales and Scotland and that I have never seen before. From the wildness of Exmoor, the flat lanes of Cheshire, the beauty of the Lake District and the breath-taking scenery of Scotland. 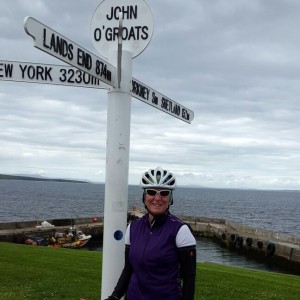 Arriving at John O Groats was just amazing and the tears flowed! We had done it! The bubbly was opened and we celebrated our wonderful achievement. It took us 14 days, 1005.6 miles, 54,588.9 feet climbed, 82 hours 1 minute and 36 seconds in the saddle, with an average speed overall of 12.43 mph. Would I do it again...if I did it would have to be the other way round but I am now on to my next challenge of cycling from Geneva to Nice through the Alps in September. To anyone thinking of doing something similar. I say do it! Life's too short!