5th Aug 2019
A place to thank, appreciate and celebrate our fundraisers.

Brilliant, courageous and terrific are just a few words to describe our fundraisers. In June some climbed, and some jumped from a plane to raise much needed funds for SUDEP Action.

Libby Holroyd and a robust team climbed Snowdonia in memory of Holly Laban. Libby informed us “20 colleagues, friends and family took part in a sponsored climb up and down Snowdonia on the 8th June in memory of Vicky and Matthew’s daughter Holly Laban who died unexpectedly last year aged four. It took five months of planning, sorting out accommodation, food and team t-shirts for the group, and lots of new grey hairs were acquired! Holly’s hike was a tough one in winds of 30mph, torrential rain and freezing temperatures. We discovered that our waterproofs stopped working after the 1st hour! We managed to get through it with true Yorkshire grit and determination, sweeties, some singing and plenty of flapjack. We even managed a generous donation from a man at the top of Snowden. Thank you to whoever you are!”

Alison Gore took on the Welsh 3 Peaks in memory of Natalie Kelk. She commented “My challenge to climb the Welsh Three Peaks in less than 24 hours began as I approached Snowden at 4am in the morning sunshine with my team. I began the first climb in memory of my beautiful friend Natalie, in what should have been her 50th year. We travelled to the next peak- Cadair Idris which was the toughest in the midday heat. Ending at Pen y fan and finishing the challenge at 11.30pm. Tough but perfect to remember Natalie.”

Gareth Higgins climbed the three highest peaks in England, Wales and Scotland in 24 hours, in memory of Darren Ryan. He told us “I lost a friend due to epilepsy in 2018, so I decided to take on a couple of challenges to raise money for SUDEP Action. My final challenge was the ‘National 3 Peaks Challenge’. The weather conditions were near perfect, if not a little muggy and cloudy. We walked up Ben Nevis first at 5am, Scafell we started at 4pm and we ended up starting Snowdon at 12:30am (in the dark). The challenge was tough going however we completed the challenge in 24 hours.” 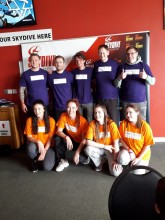 One of the scariest fundraising challenges our supporters can face is a skydive. In June a brilliant team took on the challenge in memory of Nathan Slade. Toni Slade, Nathan’s mum informed us "On the 30 June, Taryn Slade, twin sister to Nathan, and 8 brave friends took part in a charity skydive to help raise funds and awareness of SUDEP. Everyone landed safely and straight away said they would love to do it all over again! It will be four years since we lost our beautiful boy Nathan on the 14 August 2015. He was 26 years old and in the prime of his life."

Natalie Treadwell and her brilliant workplace WM Citizen Housing organised a party night and raffle in loving memory of Natalie’s sister; Kathryn Treadwell. Natalie told us: “Kathryn’s moto was dance like no-ones watching, so what better way to raise money than a party night and amazing raffle! My team know how much I loved, and still love my sister and the amazing work that SUDEP Action do for victims’ families. The night had a live band and we danced our socks off, just like Kathryn would have! It was a fantastic night with fun had by all and tons of money raised for a deserving cause”.

Thank you so much to all our June fundraisers. If you raised funds in June and would like to have your fundraising included in this blog please email [email protected].