27th Jul 2018
A place to thank, appreciate and celebrate our fundraisers.

Great SUDEP Action fundraising took place in June. Read on to find out what some of our fab supporters got up to. 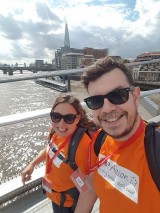 Nicci Kimber and Scott Machin walked the length of the London Marathon in memory of Ross Kimber. “I signed up for a walking marathon after seeing a SUDEP Action Facebook post. It seemed perfect as it would let me focus on something positive at a difficult time: being the day before Father’s Day and my late husband's birthday. The marathon took us along the Thames through London. It was a fantastic day, hard going at the end, but I was lucky that a friend volunteered to do it with me, so we kept each other going!” - Nicci Kimber

"I did the London Hike Challenge on behalf of SUDEP Action. 26.2 miles of sweat, aches and a few tears! Despite the soreness, it was a very enjoyable trek through the more scenic parts of London. The blisters were worth it, to raise money for such a fantastic charity!” - Scott Machin 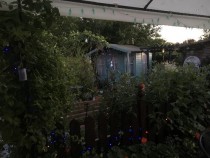 Linda Wilton used her birthday as an opportunity to raise funds in memory of Alan Davies. She informed us: “Beginning of June I had a garden party for my 40+20 birthday. It was a week after the 3rd Anniversary of losing Alan my oldest son, forever 30. So, to do as others wanted and celebrate (I feel) the wrong words, I chose to have a SUDEP Action tin and have donations with some seeds I had grown. I felt this way Alan was with me. One of his sayings was, ‘I thought about it, it is the thought that counts’. Alan you are still making a difference.” 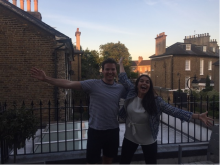 The Sumarias and James Hewitt hosted an online auction in June in aid of their broader Tuk Tuk To Turkey trip in September, in memory of Emily Sumaria. James informed us: “We hosted an online auction using the Jumblebee platform (highly recommended) and managed to obtain 70 Lots ranging from a week stay in a ski chalet, to Arsenal football tickets, to a signed England cricket shirt, to dinners at some amazing restaurants in London, and much more. We had some incredibly generous friends and businesses supporting us and after 3 weeks of furious bidding (Bharat was obsessed with checking for new bids!) we were totally astounded by its success! Hard work, but totally worth it!” Pictured are James and Amy looking ecstatic following the auction result!

Thank you so much to our July fundraisers. You really do help us to make a difference.

If you took part in an event in June and would like to be featured in this blog, then let us know by emailing [email protected].

If you have read this blog and been inspired, then we would love hear about your fundraising plans. Call Katie on 01235 772850 or email [email protected].