My name is Julia; I am a learning mentor in a secondary school and have been for 26 years. I am 49, a mum and nanna. I have a younger brother and sister, and have always been the typical bossy older sister. My relationship with Iain and Tina pretty much defined me as a person.

One Monday morning, whilst having my lunch, I took a hysterical phone call from my sister in law. I couldn't understand what she was saying, all I knew was that something was terribly wrong; I told her I was on my way. My sister worked at the school with me so I ran back to work, calling my mum enroute with a silly excuse just to check she was okay. My sister in law called again, in her emotional state, she had reverted back to her mother tongue, Portuguese. I told her I was on my way.

My sister and I were soon on our way and kept talking to my sister in law on and off. We discussed our beautiful brother’s epilepsy and wondered if Iain was just having a seizure and his wife, not being used to it, was panicking. When we finally arrived, I mentioned to my sister that it had been 15 minutes since I got the first call and that if it's a seizure, it's not good. My sister replied, reminding me to remember my CPR, and that she would be with me as soon as she parked the car.

As I walked towards my brother’s house, I noticed my sister in law was outside, crying and rocking back and forth. No one stopped to help her or ask if she was alright. I asked her where Iain was and she pointed upstairs. I ran up the stairs and saw my beautiful brother on the floor, face down, wedged between the bed and the unit. There were items on the floor. I knew Iain had already gone but I wasn't prepared to let him go. I threw everything on the bed and tried to turn him over; my sister wasn't far behind me. I looked at her and said to her, it doesn't look good.

Somehow, Tina got Iain on to his back, called an ambulance and started CPR. I tried to take over but couldn't. A community policeman came in and took over, and then the paramedics arrived. They checked Iain and confirmed that he had died at least two hours earlier. They said they could continue CPR but because he had been dead for so long, it wouldn't make a difference. I was numb and didn't feel anything apart from being sick to my stomach and a real physical pain throughout my body. Emotionally I was elsewhere. I wanted to hold my brother and tell him I loved him, but I didn't as I thought I’d be making drama. How ridiculous is that, your brother is lying on the floor dead and you don't want to cause drama! My sister was standing opposite me, tears streaming down her face, I said to her, how are we going to tell mum?

Iain had suffered from temporal lobe epilepsy and had nocturnal seizures. He had his first seizure at 11 and had stopped breathing, I was only 14 then, but I had managed to clear his airway and given him rescue breaths and CPR. Iain had vomited during the seizure and this had choked him. He was taken to hospital, and the consultant he saw told mum to get lain to the hospital if he ever had any more seizures in future, as nocturnal seizures can be life threatening. Over the years, the ambulances refused to take him and some A and E staff complained that it was only a seizure and that it would be part of his everyday life. Gradually, we all learnt to listen out for Iain and sit with him during a seizure, but just let him sleep after. There were no more hospital excursions in the middle of the night.

Iain's seizures had gotten worse. His consultant had had him stay in the hospital for monitoring, with the view of operating to help stop his seizures, but nothing had happened. Iain complained that it would have been better to stop his medicine completely to be sure to trigger a seizure.

A year later, Iain was given another date to go into hospital. He was really optimistic and hoped if he had the operation, he would be able to drive again. When Iain died, he was due to go into hospital the following week for the test. My sister and I believe he had stopped taking his medication to ensure he would have a seizure at the hospital.

When Iain's death certificate came back, we were expecting it to confirm the cause of death was suffocation but I was surprised it mentioned Sudden death whilst having a seizure, attributing factors chorony artery disease in legs. I then started researching this and found out about SUDEP and how common it was. Apart from the first consultant Iain had seen in A&E, I wondered why this was never discussed with Iain and in particular our mum. Iain was in a high risk group and if he had known the risk, I do not think he would have missed his medication.

I have found the support of others bereaved by SUDEP really helpful as they understood what I was going through. I felt at 45, Iain was too young to be taken, leaving his children without a dad and in particular, his youngest who he was extremely close to. Losing a sibling is like losing an arm, like losing part of you, we were three and now we are two. I don't even want to contemplate what our mum is going through. We lost our dad to dementia and did not ever expect to lose Iain. 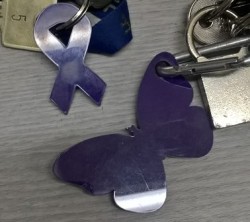 I wanted to raise money for SUDEP Action and was thinking of ways to help. One of our DT teachers, who also has the same type of epilepsy as my brother, had been making keyrings with the students. Between us we came up with the idea of purple butterflies and purple ribbons. We paid for the materials and he made them for me. We used my brother’s memorial page run by SUDEP Action for people to donate to, and I pay for postage as a way of saying thank you for donating. I at least feel like I am doing something. I wish more patients and families would be made aware of the risk of SUDEP.

If anyone would like to make a donation and receive a keyring, please email me on [email protected] stating which keyring you would like. I will give you the details of Iain's memorial. Once the donation is made I will forward the key rings to you.