19th Feb 2016
A place to thank, appreciate and celebrate our fundraisers. 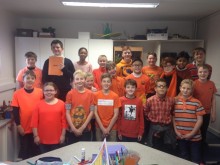 Thomas Samuel managed to raise both funds and awareness in memory of Diane Croft. Thomas commented: “I asked my school if we could do something to help raise awareness of SUDEP in memory of my Auntie Diane who died from SUDEP  in 2004.  Sammy Ashby from SUDEP Action helped me with a power point presentation which I presented in my school assembly, I asked the pupils questions and if they got the  answer right I gave them a SUDEP Action memory wristband or badge.  The following Friday we had an 'Orange Day' where everyone could wear orange and bring in a donation.  I hope more people now know about SUDEP. I hope I have helped.”

The 2nd Owen Williams Memorial Quiz was held on Saturday 23rd January in the Village Hall, Blythburgh, Suffolk.  Now in its 2nd year the quiz was set up by  Ro Williams in memory of her son Owen who died in July 2014 aged just 39. Ro informed us: “A packed hall of 18 teams enjoyed a night of fun but challenging questions, a raffle and a fish and chip supper. Owen was a DJ and trivia enthusiast so it was fitting that the winning team not only included Owen’s sister Kerry but was named after his DJ nickname – DJ Swill. The event is held annually to ensure that Owen’s memory is kept alive and to raise money for a worthy cause. Anyone interested in entering next year’s quiz can register their interest by emailing [email protected]”. Pictured is Ro Williams (left of pic) presenting the trophy to the winning team – DJ Swill in da House (L to R Kerrie McGrory, Kerry Burn, Dave Wright and Tony Burn.)

A very big thank you and well done to all of the January fundraisers. We really appreciate your help.

If you have taken part in a fundraising event in January and would like to be included in this blog then not to worry, it is not too late. Please email [email protected] to let us know about your event.

If you have been inspired to take part in a fundraising event then let us know, we are happy to help with advice and materials. Email [email protected] with your plans or questions.