Home › Ian Cole cycles 600,000 metres, a metre for everyone with epilepsy in the UK in honour of his son

Ian Cole cycles 600,000 metres, a metre for everyone with epilepsy in the UK in honour of his son 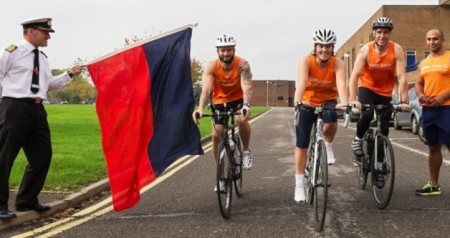 Exercise Coastal Passage Challenge is something that I really wanted to do after the loss of my 5 year old son Aedan Cole. I felt that I needed to raise more awareness of Epilepsy and funds for the charity. If I can just help one person and prevent the roller coaster of emotions that my family and friends have had to go through since my son’s unexpected death, that would be enough.

I have always been highly motivated, and working as a physical trainer in the Royal Navy I am fairly fit.  I looked at the number of people estimated to have Epilepsy in the UK, which is 600,000 and decided to cycle 1 metre for every person. I conveyed this on a map of the UK and Dover to Falmouth was my preferred option. Also, as winter was approaching, I thought the South Coast would be the better option for weather and I could request support from the Royal Navy in order to get the challenge running smoothly.

My son’s death impacted not only my close family and friends but also my work colleagues. I work with very fit and highly motivated people and when I proposed my plan to close friends, they did not hesitate to get involved. My friends, Leona Young, Ian Robinson and Dwayne Hinds decided to join me. One member of the team has a son with Epilepsy, so this was something that he wanted to be involved with. 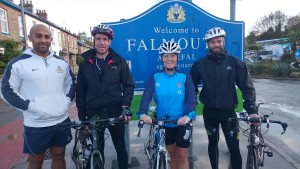 I didn't really anticipate how tough the challenge would be. We travelled 150km (93 miles) per day with stops at Brighton, Salisbury, Exeter and Plymouth. The first day, Dover to Brighton was a rude awakening. Heading out of Dover was tough but a lovely cycle along the sea front. We stopped for a cake and coffee in Hastings, which was a little bit of a mistake as we found out that cake is not the best fuel for the body when you are doing an endurance challenge like this. One of the lads started to feel the pace and turned a little white. We got him in our support van, fuelled him up and continued the rest of the cycle.

We sorted out our diet for the second day (Brighton to Salibury) with a lot of sugary sweats, nuts and about 10 litres of water. Third day Salisbury to Exeter was emotional, Hills on Hills on Hills on Hills. We anticipated that this day would be the toughest and it didn’t disappoint. We cracked on as a group with a smile on our faces and just peddled through the pain. We were tackling hills more suited to the Tour De France. The cycle was hard but we are made of strong stuff and got it done.  When the days got tough we all supported and motivated one another. I didn’t want to let myself down and the people that had sponsored the group, but the memory of my son was a huge motivator for me. 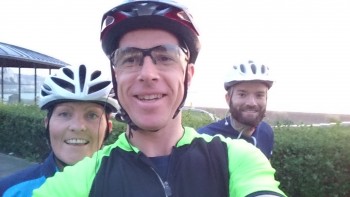 After completing the challenge, I have a mixture of emotions.  I am happy and relieved that the challenge is over because it was so tough. I am also grateful and thankful for all the people that sponsored our team. I am proud of our team as we all worked really hard to complete the challenge.  I found myself showing signs of sorrow as I reflected on the time my son and I had together as we passed through some of the towns and cities we had visited for family holidays.

We managed to raise about £1000 for SUDEP Action, which I am very happy with. I have never done an endurance challenge on this scale before and now that I have completed it I would do it again. I have volunteered to do a Lands End to John O’Groats next year.