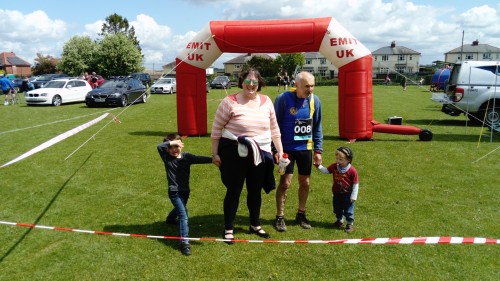 On 14th May 2017, my dad and I took part in the Highley Sprint Triathlon, a 400m swim, 18km Bike Ride and 5km walk or run.
We did this in order to raise money for SUDEP Action as my younger sister, Rowena, had epilepsy and she died last year, whilst 28 weeks pregnant and we lost her unborn baby too. She was just 32. She left behind her husband and her five year old daughter. The autopsy diagnosed her death as being caused by SUDEP (Sudden and Unexplained death in Epilepsy).

Rowena was six when she was diagnosed with epilepsy, it affected her whole life, her seizures happened mainly at night, I am not sure she ever had a decent night’s sleep; she struggled, especially at Secondary School because of hormones and lack of sleep. Her personality was fundamentally changed by her illness from the sweet, intelligent kid I knew, to a woman who was brutally honest and abrupt. But she was my sister and I loved her. Some of her traits remained, her loyalty to those she loved and her determination not to let her epilepsy stop her from achieving things.
She took part in half marathons and sports events to raise money for Epilepsy Action; she got married, had her daughter and was a loving and protective mum. She achieved it despite having a life altering illness.

We all miss her very much. We have missed her and her unborn son being a part of our lives and I have lost my only sibling.  For me this has been especially hard, I always thought she would be there, through the highs and lows of life and till the end of my own life, because she was younger than me, but this was not to be.