In January, we lost my cousin's beautiful, kind, fun loving, giggly, and intelligent granddaughter. Jessica Monks was 18 years old and had epilepsy from a young age. Although this was at times a struggle, Jessica never let it hold her back; she loved to run, swim, and coached younger children at taekwondo. She was working in a lawyers’ office and was looking forward to starting university after the summer. Jessica was much loved by everyone who knew her and is missed by us all.

Following her death, Jessica’s parents, Susan and Steve, her Uncle and some friends decided to run the London 10k in July for SUDEP Action. I knew that I would never manage to run that far, I cannot even run for a bus, but I also wanted to help. As I do not live near Jessica’s parents, I wanted to show them that I was trying to support them as much as I could at this awful time. So I felt that doing my bit for a charity that was helping them and that they were in turn also trying to help would be the least I could do. 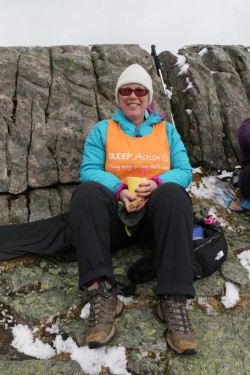 When SUDEP Action had its Purple Day activities, we decided to make Shiehallion our purple day event. I live in Scotland where mountains over 3000 feet are called Munros. There are 283 Munros in Scotland and climbing several of them is called Munro bagging. Friends of ours had suggested at the beginning of the year that they fancied bagging their first Munro so we decided to join them. We chose Schiehallion because it was one of the nearest Munros to where we live and also one of the easier ones, if you believe the guide books!

The forecast for the weekend of our climb was very poor but when we got up early on the Saturday morning, it was dry and we could see the top of the mountains.  Jessica was definitely watching over us, it stayed dry most of the day but was very windy and quite cold.

The first two thirds of the climb is on a good path, but the last third is rocky and very hard going, having to constantly watch where you are putting your feet. Using our walking poles was a huge help at this point.

I have challenged myself in the past, I walked the 96 mile west highland way last year but Schiehallion was way out of my comfort zone. The mountain has two false summits, the first as you approach, you know it is not the top because you haven’t been going long enough. You reach that point and see what you think is the top but when you reach that point you realise there is still another hours walking to come. At this point I was tired and shocked at how far we still had to go.

Near the top there were a few gullies full of snow that we had to cross.  As the ground below the snow was very rocky, it was very difficult because you didn’t know if you were standing on a rock or between rocks. At one point I got my leg stuck in the snow and my partner Dave and our friends Diane and Sandy had to dig it out for me!

When we finally got to the summit, there were smiles, hugs and tears all round. I thought of my love for Jessica, her Mum and Dad  and the rest of her family.  There was some snow falling as we started our decent. 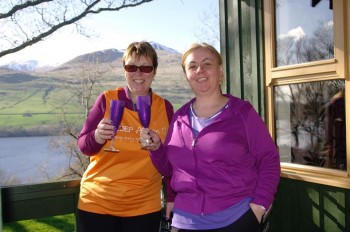 Going down was just as hard as going up. We had decided we would have our bottle of Prosecco when we got back to our lodge.  We thought it was best to make sure we managed to get down as well! Jessica loved Presecco and we also had purple glasses for SUDEP Purple Day. I felt a huge sense of achievement.  I am not the fittest person around and carry a wee bit of excess weight so I am very proud of myself that I managed to climb 3547 feet.