This year’s British London 10K had outstanding results. Forty runners took part in the race; all running in memory of lost loved ones. Their fantastic fundraising efforts meant that this year’s race raised over £7000!

Katie Vale, Fundraising and Administration Officer for SUDEP Action, along with Trustees Jennifer Preston and John Lipetz, attended the event to support the runners. Katie informed us: “The atmosphere was amazing. It was heart-warming to see the hard work and effort that our supporters put in in order to raise awareness and much needed funds.” 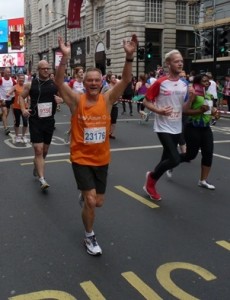 SUDEP Action Trustee Roger Scrivens has run the London 10K five times in six years, in memory of his daughter Becky. Later this year Roger will be turning 70 and so the 2016 race event will be Roger’s last attempt at the British London 10K.

Roger said: “I became a Trustee in 2009. Being a Trustee opens the door to receiving lots of invites to attend events where our supporters are raising funds. One of the first ones for me was the London 10K in July 2009. I attended and was most enthused by our runners, the event overall and the sheer amount of goodwill and adrenaline that was 'in the air'. I decided there and then to take up running and enter for the 2010 event at age 64. I completed in circa 1h 10m and decided that a time of 'under 1hr' was potentially achievable”. 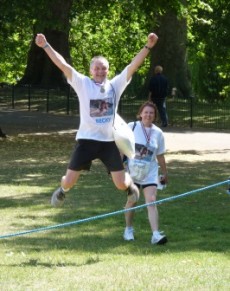 We are inviting supporters to take part in the event or to come along on the day to cheer Roger and the other runners on. Email [email protected] if you would like to take part in or support the event.