Daniel Dench’s family have been tirelessly raising awareness of SUDEP and funds for SUDEP Action in his memory.  The family has organised various awareness campaign activities since Daniel passed away in March 2013 as a result of Sudden Unexpected Death in Epilepsy (SUDEP). Daniel was only 35 when he died and had lived with epilepsy for 20 years.

Daniel’s mum Sally Dench explained: “Daniel had his first seizure aged 15 it came completely out of the blue. We have never known the cause for his epilepsy. Daniel always had grand mal seizures but they were never that frequent and he led a very full life, graduating from university with an honours degree in construction management. He was a devoted husband and very proud daddy to his daughters Sophie and Jessica.”

“Although through his twenty's Dan had to surrender his driver’s licence on several occasions he hadn't had a daytime seizure for almost 6 years when he passed away. Dan had started having the sleep seizures though and in his last year they had become more frequent, about one every two months.” 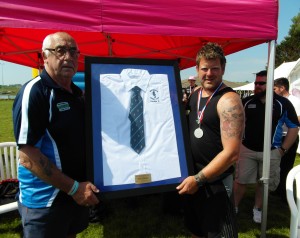 Daniel was a former rugby player for Weymouth. His twin brother Michael organised a successful Sevens tag rugby tournament at Weymouth and Portland RFC in Daniel’s memory.
Michael said: “It was a great success and we had a lovely day with glorious sunshine remembering Dan but as always tinged with sadness because it would have been his type of perfect day with family, rugby & beer”.

Daniel’s mum Sally Dench commented: “The support from the Rugby club was fantastic and we were all pretty chocked up when they presented Michael with Dan’s formal club shirt, they also provided medals for everyone in the 8 teams who took part and the winner’s trophy in Dan’s memory. We were so pleased to see it come together for Michael. He misses Dan dreadfully but felt his brother was very much with him when he put on Dan’s rugby boots to wear.”

“The Dench family had a great day, remembering Dan in the best way possible because of his love of Rugby and raising £502 for SUDEP Action. The Framed Shirt presented to Michael was a lovely thoughtful gift from the Club. Once again an event where the support in memory of Dan made us feel so proud of our much loved and missed. We, like so many others had never heard of SUDEP and will never know if we had had the knowledge that we now have, would Dan still be with us?”

Sally has been creatively raising awareness. She dyed her hair purple for Purple Day and apart from raising £807 for the charity she also managed 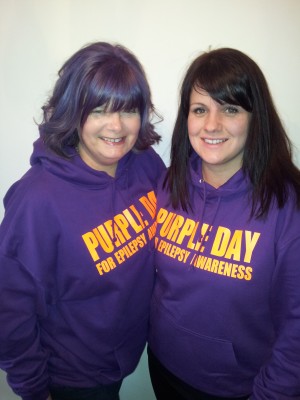 to garner good press coverage for her event.  Sally and Michael’s wife Laura also held a purple cake sale on the day and gave out SUDEP Action information leaflets.

Daniel’s family have planned several more events including a Christmas day swim across Weymouth harbour with friends. They hope that the rugby tournament can be staged every year in memory of Daniel and for SUDEP Action.

“We feel very strongly that if by promoting more awareness of SUDEP it helps other people with epilepsy and their families, then any fundraising we can achieve has got to be worth it. We hope as a family to make a life time commitment to raising funds for SUDEP Action in memory of our very much loved and missed Daniel” Sally Dench.