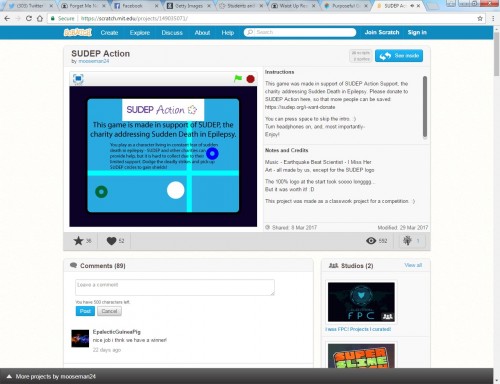 Churcher’s College recently created a game that aims to raise awareness for SUDEP Action in a unique way, and also encourages students to develop their computing skills.

The game has been really popular with over 590 views, 52 likes, 36 favourites and 89 comments. The game was so good that Scratch, a site that enables young people to create interactive games, decided to feature it on the front page of their site so it can raise awareness of SUDEP.

The final for the competition will be next term and the school will select three teams to go forward to the final, to be held at Red Hat. Students and Teachers are also doing other activities in Grenville House, Churcher’s College, for SUDEP Action, both inside and outside school. Karen McCathie and her first year class (year 7) are currently running various activities to raise money for SUDEP Action. This has included bake sales; the class also had a second hand goods sale over Easter.

SUDEP Action is incredibly grateful for the continued support of both teachers and students at Churcher’s College.