Home › Chris Stephens conquers Kilimanjaro in memory of his wife

Chris Stephens conquers Kilimanjaro in memory of his wife

I am 38 years old and have two children, a son aged 15, and a daughter aged 12. I became aware of SUDEP Action following the sudden death of my wife Katie, last year.  She was 37 years old when she died.  Katie was a fitness instructor who had no previous signs of epilepsy. However, she suffered two seizures, the second of which led to a massive brain haemorrhage which led to her death.  Following an inquest, and finding out about SUDEP, I researched the condition as I had never heard of it. 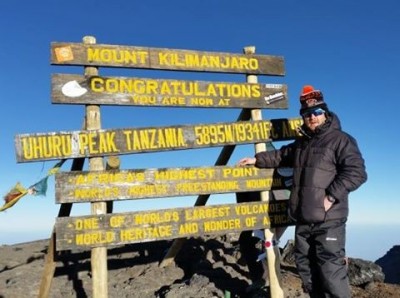 I decided I wanted to raise awareness of this condition, and some much needed funds for SUDEP Action.  I thought Mount Kilimanjaro would be an interesting challenge, which would also combine my love of travel. I had never been to mainland Africa before, so I thought this would be an ideal challenge.

I am a member of a gym, and train four to five times per week. As there is no way of preparing for the altitude without going in an expensive simulator, I just concentrated on keeping my general fitness levels up. In the couple of months before the trek, I increased this to include two sessions per day, a couple of times each week.

Once in Tanzania, we started off for Kilimanjaro at around lunchtime on Friday, 12 February, 2016.  We set off for the summit at midnight on Tuesday, 16 February. It was pitch black and freezing cold.  Before too long my feet were frozen solid!  It was a difficult few hours because all you can do is trudge along, focusing on the feet of the person in front of you.  Because it is so dark you cannot see the top of the mountain when you look up, so you have no idea how close or far you are from the top, all you see is a line of lights from head torches bobbing along the side of the mountain. 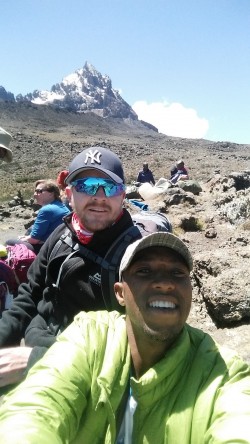 Summit night was difficult. The main thing that gets you through is the thought of those that have supported you, and those that you are doing the trek for.  That and the support of your fellow trekkers, and the wonderful support crew who guide, and at times physically carry you along!

I arrived at Uhuru Point, the highest point of Kilimanjaro, at around 7am on Wednesday, 17 February. It was a surreal feeling, filled with a range of emotions - relief and happiness that you have made it, tinged with sadness as you think about your reason for being there. It was also physically and emotionally draining, but also wonderfully fulfilling and worthwhile.  I have memories that I will carry with me for a long, long time.

I met some wonderful people, our team of guides and porters were truly amazing. It is difficult to explain what it is like to be trudging up the side of a mountain at over 5,000 metres above sea level, kitted out in all of your expensive equipment, only to be overtaken by a porter wearing jeans, a t-shirt and a pair of trainers, carrying a 20kg pack balanced on his head!

I am proud to have raised over £3,000 for SUDEP Action.  This is a charity that does vital work in looking to prevent more deaths, and support people affected by this little known condition.