In April 2015 we were inspired to hold a Charity Ball in memory of our gorgeous little boy Charlie, after being guests at a Ball held by Emma and Des Carter, in memory of their gorgeous daughter Rosie.  It was an event we have wanted to hold for a number of years, but have been so busy running other events, we didn’t feel we had the time to dedicate to making it a success.

We decided to call our event ‘The Sunflower Ball’ because when Charlie died, we struggled with what type of flower to put on his coffin.  Traditional flowers seemed so wrong.  What flower do you put on the coffin of a child?  We chose Sunflowers, as they reminded us of everything about Charlie, his smile, his happy personality, that he loved the summer and being outside and it was colourful and bright. 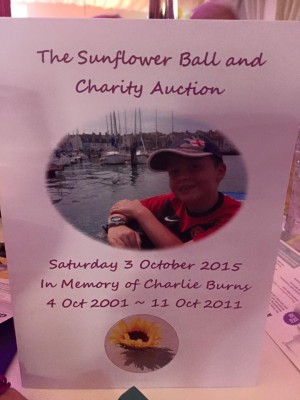 That flower has stuck with us ever since, and will always be our constant reminder of happy memories of a little boy who had such a zest for life.  October is also the toughest month of the year for us.  Charlie died a week after his 10th birthday, and was also cremated the same month, so needing to have something to distract us from the sad times, we chose the 3rd October 2015 the day before Charlie’s 14th Birthday.

We have been supported by so many people since Charlie’s death, and received so many offers of help, now was the time to call upon all of those offers for ‘The Sunflower Ball and Charity Auction’.   Once The Stone’s Hotel in Salisbury kindly agreed to donate their venue and facilities for the event, we used our most powerful tool, our story, and by telling our story, the support we received from local media and businesses was extremely humbling.

150 guests from far and wide (and several families we have become firm friends with through our sad link with SUDEP) joined us for a night that was such a fitting tribute to Charlie.  A Champagne Reception was followed by a Three Course Meal.  Guests were entertained throughout the meal by The Salisbury Plain Military Wives Choir, The Rock Choir, and Luke Price (a Tenor from the Royal Opera House in London), and after his rendition of ‘Bring Him Home’ from Les Miserable, there wasn’t a dry eye in the house!  Several PowerPoint presentations including photos of Charlie’s life, and some of the Fundraising Events we have been involved with since his death was followed by a video speech from Claire Perry MP (who sadly couldn’t be with us in person on the night).  This led into the Auction, compared by Faye Marsh and Martin Starke from SPIRE FM.  A local live band ‘The Rookies’ played after the meal, to a full and packed dance floor, and guests were also kept extremely entertained and amused by the photo booth and all of its props!

Our evening was filled with so many emotions; happiness, sadness, laughter and tears.  But one thing that will stay with us forever is how much fun everyone had.  Just before midnight we mentioned that Baz, Izzie and I would be going outside to let off some balloons for our little man as he was about to turn 14.  The next thing we knew, the entire room had joined us outside with balloons from the tables to wish Charlie ‘A Happy Birthday’, and we all stood watching the balloons head up to the stars.  It was the perfect end to an evening we will never forget!

Over £10,000 was raised from the evening, and knowing that the money would help the WADD trials to go ahead made everything so worthwhile.

Most of our guests stayed at the Hotel, the last guests left the bar at 05.00 hrs.  Breakfast was simply buzzing.  People reminiscing about the evening and wanting to know when we would hold our next Ball!  The Burns Family have already booked the same venue, and The Masquerade Ball will be held on 31/12/2016!