Football fanatic Lee Johnson was offered his dream job as a soccer coach in America just 24 hours before he died from a seizure in his sleep.

The 24-year-old had been put through his paces at an assessment day when he was told by the soccer firm of his success.  But because he wanted to wait until he had written confirmation of his acceptance, he never got the chance to tell his father Simon the good news.  The next morning, Lee’s devastated flatmates discovered him dead in his bed. He had died from SUDEP, Sudden Unexpected Death in Epilepsy, the term used when someone with epilepsy dies suddenly, often after a seizure that involves a loss of consciousness.

“It came as a bolt out of the blue,” said Simon, 55, from Wetherby, West Yorkshire. “We never knew this could happen. There was no sign of any alcohol or drugs, Lee had just gone.  It was like someone had turned off the light.  “I have spoken to specialists and several GPs about whether Lee should have known his epilepsy could kill him. I’m of the opinion – yes, he should’ve known. Some of his mates said Lee had such a full life it would’ve held him back. Of course I wonder if he might have worried at night whether he would wake up in the morning. But I think people should be made aware of the dangers just like any other condition.”

And it is that strength of feeling, that Lee should have been warned about the risks associated with his epilepsy, which drives the family to use every opportunity they can to spread the word about SUDEP.  Since Lee’s death on Sunday, December 12, 2010, Simon, his wife Vicky, and daughter Becky, 23, plus umpteen friends and relatives, have raised over £100,000 to fund research into epilepsy and awareness about SUDEP. 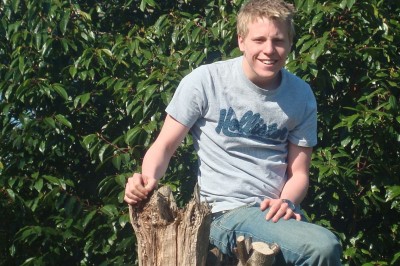 In February, a ball held at Leeds United Football Ground where Lee trained as a junior footballer until he was 12 sold 650 tickets, raising £53,000, and featured a 7 piece band, a singer soloist, an inspirational speaker plus video clips from Prime Minister David Cameron and PR guru Max Clifford.  The Johnsons donated £12,500 from the total to Epilepsy Bereaved to help fund its bereavement support service.

“After Lee died we were just left alone,” said Simon, a sales director for Kappa. “The specialists never contacted us and we didn’t hear from our GP or the hospital where Lee went.  The police were with us for a couple of hours after breaking the dreadful news, but that was it. We were hit with this bombshell but had nowhere to go.  “Then we found EB, whose counselling service has helped us enormously. Being able to talk to someone at the end of the phone who knows about SUDEP; who can answer our questions and support us has been invaluable. It doesn’t matter that we’ve never met them, it’s just knowing they are there.”

Simon says too few people have heard about SUDEP – including him until Lee’s death – and that is what he intends to change.  “The number of people that have said to me they had no idea that you could die from a seizure is shocking,” he said. “People need to know that epilepsy can kill. Whenever I give talks I always say: ‘We’re not here to frighten you, but you need to be aware of the dangers.’ It is scary to think that this is happening to families almost every day.”

Lee was nine-years-old when he was diagnosed with epilepsy, but Simon says his son was determined the condition was not going to hold him back.  “Very few people even knew he had it,” he said. “Lee would often say: ‘Why do people need to know? It’s my problem and I’ve got it under control. I know I can’t have late nights or go out drinking, but I’ll work with it.’ And he did. He knew he would be on medication for the rest of his life.

“Lee and I were very close – we spoke every day. He had been to university, got his degree, learned to drive. He loved anything to do with football, and the tragedy is he’d been told by the soccer company the day before that he’d got the job he always wanted. He was so modest he wanted to wait until he’d got the offer in writing before telling me.

“His death has changed our lives completely. We know we will never be the same again. There isn’t a waking hour when we don’t think about him. We’re just learning to cope and adapting to things now. One of Lee’s best friends is getting married soon and we’ve been asked to go to the wedding. Lee would’ve wanted us to go, but it is going to be very hard.”

Simon says fund raising and talking about Lee and SUDEP, is giving the family somewhere to channel their grief. “It has helped, for sure,” he said. “It means that at least something positive is coming out of the most horrendous situation ever. I know nothing can ever hurt us more than this.
“People say: ‘I don’t know how you do it,’ but I always say: ‘You don’t know until you’re in that situation.’ Apart from spreading awareness, the ball was a celebration of Lee’s life and what he’d achieved. It was a party and he would’ve loved it.
“We did it because our son is worth it. And I truly believe he is looking down at us now; watching and smiling and thinking we did a great job.”