Caron Robinson walks on fire to raise awareness of SUDEP

Caron Robinson and her friends recently did a firewalk to raise awareness of SUDEP in memory of her daughter Nikey Robinson. Nikey died from Sudden Unexpected Death in Epilepsy (SUDEP) in March 2013. Her mum Caron has organised various events and activities to raise awareness of the condition and funds for SUDEP Action. 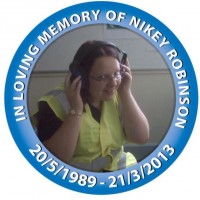 The charity firewalk was one of the most challenging activities Caron has ever done. She said: “The idea of the firewalk came about when a local pub called Georges asked for walkers to do the challenge for some local charities. I contacted the Pub owner and asked if he would consider a firewalk for SUDEP Action in memory of Nikey since she was a regular customer at his pub. He agreed and asked if I would be able to get many people to support it. So I announced it on our Facebook page dedicated to Nikey and invited all my crazy friends to do it with me.”

Commenting on how she got the courage to walk on the burning coals, Caron said: “Our instructor told us the temperature of the coals was 550 Degrees Celsius, but still, pulling out of the firewalk never crossed my mind. The trainer told us that once you step on the coals, you had to keep walking, keep a positive attitude and focus on the end. We were given training beforehand but I really was not concerned, for me, a blister or two is nothing. I didn’t have any burns or marks, in fact, we all did the firewalk twice.”

Becky commented: “I decided to support SUDEP Action because, apart from Nik, I have a colleague who has epilepsy so I wanted to make people more aware of the charity’s work to prevent epilepsy deaths. It was amazing as you are only given a little spark of adventurousness.  You mustn’t lose it”. 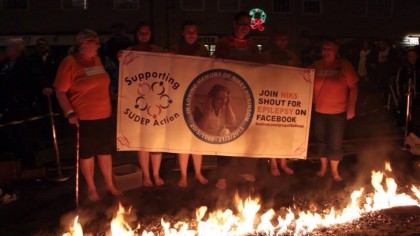 Paula, who suffers from Fibromyalgia, decided to take part, to give herself a new challenge: “It is difficult to tell anyone why I accepted the challenge to walk on fire in aid of SUDEP Action. I have had the privilege to meet many remarkable and inspirational people throughout my life, Caron and Nik are but two."

“I was injured during military service and subsequently developed Fibromyalgia for which I received treatment. Recently, I suffered further medical problems and a friend encouraged me to get help. Although I have had a difficult year, there is now light at the end of the tunnel. The Firewalk marked the start of me regaining control over my mind and body. What could be more fitting than to do it in honour of a beautiful young lady who faced challenges head on and loved life?”

Caron said: “I am pleased we all completed the challenge as a group. Like always, everything I do is in memory of Nikey and I always cry my eyes out at the end of all our events.  Nikey faced challenges every day, all day, my firewalk challenge lasted only for seconds. Nikey is my inspiration and she always knew I was a little bit crazy.”

“All my firewalkers were very proud of themselves for completing something different for charity. None of them had ever done anything like it before. I would do it again, but to be honest I am more likely to organise something different for those of my courageous friends who wish to challenge themselves. After Christmas, I am booking about five or more friends to do a 160ft bungee jump in Cambridgeshire on 13th June, 2015.”