Home › Back from the International Epilepsy Congress

Back from the International Epilepsy Congress

I have just come back from the International Epilepsy Congress. Thousands of clinicians, researchers and advocates meet here every two years to share learning, projects and developments.
It was such an honour to be invited to speak about our learning and projects.

It felt so good to have moved on from changing hearts and minds on whether SUDEP exists, whether we should be open about it, and whether there was anything that could be done – to showing the action we have already taken and will continue to strive for.

I found so many hearts and minds agreed that reducing exposure to known risk factors, is a starting point for action, whether it’s to stop SUDEP or other deaths.
I shared what we (SUDEP Action) knew from work with families and surveillance of deaths in the UK -  that all too frequently there are a range of options and services that might be tried, if only risk is understood and flagged.

I told a story of a young mother, who had two seizures and ended up in A&E. She then lost her job due to seizures, and then lost her benefits because she was considered ‘fit for work’. She wanted to see a specialist but was getting nowhere with the GP. She had guidelines but the GP said her seizures were well-enough controlled. She died suddenly some months later. She didn’t have the knowledge, tools and support to be able to advocate for herself and push for changes to her situation.

I was able to talk about how our Checklist and EpSMon are available to enable people, professional or patient, to make sense of what is known already about epilepsy risks, to try to prevent crisis and to prompt conversations at times of changing risk or indicate when new interventions may be available.

This seemed increasingly important as I listened to, talk after talk, on new technologies. Professor Ryvlin, a leading SUDEP expert, flagged caution about technologies on the market – both the challenges and disappointments. It was sad to hear a speaker talk about SUDEP occurring in someone, who had been using a new technology. SUDEP Action has chosen to contribute funding to research and development of a wearable device and expectations will evolve with that knowledge.

Clinicians and advocates from many countries came up to me after my talk, on the SUDEP, Seizure Safety Checklist and EpSMon tools, to see what was possible in their countries. We hope to announce an exciting new collaboration, marking the start of this international potential, as part of our plans for 23rd October. 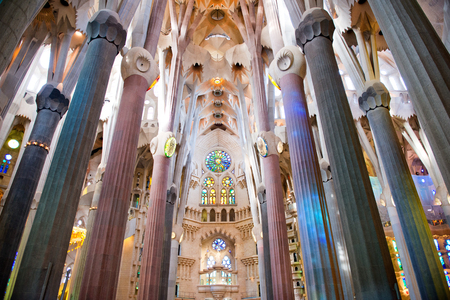 I did make time to think about all our supporters in Gaudi’s famous Sagrada Familia.

The amazing light, that for me felt so natural, so healing and so hopeful.