24th Sep 2018
A place to thank, appreciate and celebrate our fundraisers.

There are lots of ways that our supporters raise funds for SUDEP Action. Take a look at our August blog for a great mix of tough challenges, a fun day and a relaxing Strawberry Cream Tea. 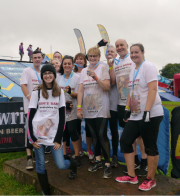 Janette Dunion and a fab team took part in Rough Runner Scotland in memory of Samantha Dunion. Janette informed us “Samantha, my sorely missed daughter, was only 19 when she was stolen by SUDEP in June 2017. She is very much at the heart of our fundraising challenges. Two more energetic members of 'Sam's Bams' are taking on Man v Mountain in September, the rest of us did Rough Runner (5K meets Total Wipeout and Gladiators). We had somersaults, face plants and some questionable celebration dancing, but we had fun, and Sammie would have loved that.” 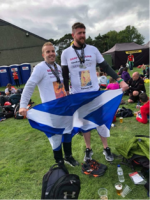 Also, in memory of Samantha, two brave chaps took on Man vs Mountain! Janette detailed. “We have been fundraising as Sam’s Bams in memory of my daughter Samantha. Man v Mountain (Snowdon) = gruelling endurance test. 22 miles of very rough terrain, wet, slippy conditions, poor visibility on Snowdon, other hills, vertical kilometre, extremely cold water etc. So full of admiration for Bryan (Sammie’s cousin) and Den (friend) for what they achieved, especially watching the cramping muscles at the end. They left a stone at the summit for Samantha - she’d be SO proud of them for getting there.”

Soroptimist International Heswall and District are supporting SUDEP Action this year thanks to SUDEP Action supporter Sandra Sandland in memory of Sandra’s daughter Carolyn. Soroptimist Maureen Sayer informed us “As President of Soroptimist International Heswall and District, I feel privileged to have been able to choose SUDEP Action as my charity for the year. Sandra Sandland’s talk enlightened the Members in the Club about the charity and SUDEP which encouraged them to raise funds. Jean Schroeder a previous President of the Club offered her home and garden for the Strawberry Cream Tea and the other splendid Club Members came together to make scones, serve the guests and do the washing up. A delightful afternoon was had by all who participated in the event.” 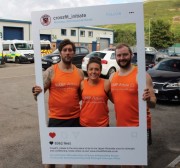 Steve Davies along with others from CrossFit Initiate took on a 12 Hero Workout challenge in memory of Rebecca Jane Davies. Steve informed us “Our aim was to raise as much as possible for SUDEP Action by completing 12 tough workouts lasting from 20-50 minutes each in 12 hours. My family has always supported this charity as my sister lost her life almost 14 years ago so wanted so this was in memory of her and many others who have been affected by this. The 12 workouts we chose were hero workouts which are tough and designed test your mental toughness as well as physical fitness. Hero workouts are created when someone affiliated to CrossFit dies in the line of duty, hence the name “Hero”. It was an early start for the workouts at 6am starting with an iconic CrossFit workout called “Murph” which took up to 50 minutes with some members wearing a weighted vest. The workouts were going well until our hands started tearing and even holding a kettlebell and a barbell become a tough task alone. There were 4 of us that completed all

12 workouts and others completed as a team and many others done what they could.”

Michael and Laura Rowlinson hosted their annual family fun day in memory of their son Jack. Laura detailed “Myself and my husband Michael have been raising money for SUDEP Action for the last 4 years in memory of our son Jack Rowlinson who passed away on the 19/12/14 aged 2. This year we did a family fun day for children, we had an inflatable slide, face painter, tombola and much more, the day was amazing and went a lot better than we could have hoped for. It raised a large amount for such a wonderful cause.” 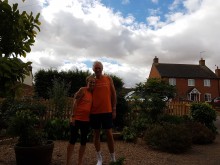 Becca Tuach and her dad took part in a friendly running competition, raising funds and awareness for SUDEP Action. Becca imformed us “After the loss of my cousin, my dad's youngest niece, back in March we decided we wanted to do something to offer a small token of our thanks back to SUDEP Action. We both run (dad likes to call it jogging as he claims he isn't fast enough to be a runner!) so we set ourselves a challenge for August; to see who would run the furthest across the month. Whilst dad claims to be slow, he runs for longer and covers more distances than I do - especially during the school holidays when I have my three little people at home full-time. We began the month with a parkrun together. It was part way round I was struck by what had happened, Sarah had been one of four sisters- just as I am. Waiting for Dad at the finish was emotional and I was pleased to be surrounded by people I didn't know. We then headed home and set out to cover the kilometres. The course of the month saw us running in our home counties of Northamptonshire and West Berkshire as well as further afield; including Jersey and North Devon. We ran together again at a Colour Run, in the middle of the month, joined by my eight year old son. As the end of the month approached, the distances were still close; with runs being squeezed in until the eleventh hour! And the result of the challenge? I ran 100.49km and my Dad 100.18km! Little does my dad realise that, he has set up his running app so I can see how far he has run, and when, so I could sneak ahead after we'd agreed he would stop jogging! Hopefully the combined 200km will help raise the profile of SUDEP Action and awareness of its cause, our orange vests are well travelled and may not be hung up quite yet!” 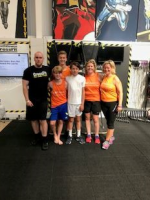 Tom and Xander Samuel ran 21k along the cuckoo trail from Heathfield to Eastbourne on the 2nd August in memory of their Aunty Diane to support the Prevent21 campaign. Supported by Mum, Michelle and friends Jacqui and Noah. Tom and Xander informed us “It took us 1 hour 53, the middle bit was hard but we were doing it for SUDEP Action, for our aunty who died from SUDEP, so we weren’t giving up." Michelle comented "Big thanks to Full Range Fitness for their support at the finish.”

Thank you so much to all our August fundraisers. It is thanks to your hard work, determination and support that we can provide free bereavement support and try to prevent epilepsy deaths from happening. We very much appreciate your help.

If you are reading this blog and have been inspired to start fundraising for SUDEP Action then let us know. You can email [email protected] or call us on 01235 772850.