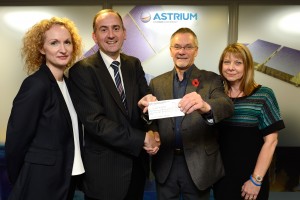 An Astrium Limited charity sponsorship program in memory of Becky Scrivens has raised over £2,750 for SUDEP Action.  Becky died from Sudden Unexpected Death in Epilepsy (SUDEP) in 2004 at the age of 11.  Since then, her parents Roger and Sandie Scrivens have been involved with the charity and helped raise awareness and funds.

Each quarter, the AECC identifies two charities from those nominated by staff to be recipients of funds generated through various social activities. Astrium Managing Director, Colin Paynter, nominated SUDEP Action to receive sponsorship for the August to October 2013 quarter. Colin is already a long-time supporter of SUDEP Action through his personal friendship with the Scrivens family and is a regular, generous donor to the Charity.

Roger and Sandie initially met with Astrium’s Claire Foster to discuss the strategy for the sponsorship period. Claire manages the AECC activities at the company’s Portsmouth site and proved to be the driver for the successful project. During the active 3 months period, the AECC supported SUDEP Action via various social activities. These included a lunchtime presentation by Roger and Sandie on the work of SUDEP Action to Astrium Limited employees in August followed by a Quiz Night involving many Astrium staff members and six teams formed by friends of the Scrivens family. 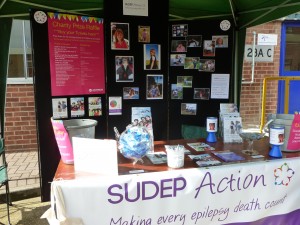 Astrium also supported SUDEP Action at its Families Day event at the Portsmouth site in September where raffle ticket sales alone raised £1,500 for SUDEP Action.  In addition, the Scrivens family manned a SUDEP Action booth at the event handing out leaflets, selling SUDEP Action merchandise and raising awareness about SUDEP.

Other organisations involved in the Astrium events also made donations to SUDEP Action.

Commenting on the sponsorship Roger and Sandie pointed out that: “one particularly encouraging aspect of the association was that the plentiful supply of SUDEP Action literature provided to the AECC was all taken by personnel during the sponsorship period.”

Rachel Groves, Fundraising and Operations Manager at SUDEP Action commented: ”What an incredible amount of money this association with Astrium has raised. And more important than that in some ways is that all the people involved will remember about SUDEP. Perhaps there are other supporters out there who have links to companies who might be able to do this type of thing on our behalf. Here’s Hoping!”