31st May 2019
A place to thank, appreciate and celebrate our fundraisers.

A variety of brilliant fundraising took place in April.

Elle Warren and her colleagues at The Great Northern Railway Tavern, held a fun fundraiser, in memory of George Nazer. She informed us “On the 8th April, we held a Craft Beer Festival in memory of our late friend George Nazer. He sadly passed away last November, and we wanted to celebrate the amazing person he was, in a way he would love. George was the Deputy Manager at The Great Northern Railway Tavern, and a best friend too many he worked with. We got together with a lot of his friends and family to hold “The Nazer Fundraizer”. The night was a huge success with over 10 different craft breweries donating beer, a mega raffle and his favourite food on the BBQ. The support for this event was incredible and we managed to raise a lot of money for SUDEP Action, in his name on what would have been his 26th birthday.”

The Soroptimist International of Heswall & District Club ended their year of fundraising, in memory of Caroyln Sandland with a fantastic music event. President Maureen Sayer commented “Soroptimist International of Heswall & District Club were supported by the Wirral Singers to produce an event on the 5th April at Heswall United Reform Church raising funds for SUDEP Action, through an evening of music, rhyme and bell ringers, raffles and refreshments. Donations were made by local florist Hare & Hatter, and pubs Jug & Bottle, and Fox & Hounds, and dress shop, Sue Huntington. It was a delightful musical evening for all. Sandra Sandland informed the audience about SUDEP Action.”

Michael Harrison was one of our fantastic London Marathon runners.  He said “The weather was kind on the day and enabled me to complete the distance in a personal best of 4:47. It served as a great way to remember the life of my brother Andrew Harrison, who passed away in June 1997.  Bringing together my now extended family (wife, children, mum, dad, sister in law and nephew) to cheer me on.” 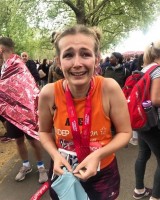 Alexandra Whaley was another of our fab runners. She commented “The total I have raised makes every step worth it!! I think it’s finally sunk in after 4 weeks now. If anyone was thinking of running the London marathon for SUDEP Action, I couldn’t encourage them enough.” 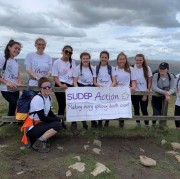 Our fantastic long-term supporters, the Leeds University Union Women’s Hockey Club took part in their annual Yorkshire 3 Peaks Challenge, in memory of Emily Sumaria. Community Secretary, Geni Carter, informed us, “As part of our annual Challenges for Champions, 40 members of our hockey club took on the Yorkshire Three Peaks Challenge with the aim of completing it in under 12hrs. It’s safe to say the majority of us had not mentally prepared for the challenge. It really was a beautiful day and such great team mates, everyone made it to the end in under 12 hours!” 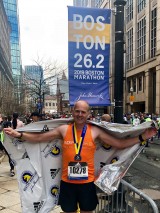 Jeremy Newsome completed the 123rd Boston Marathon and raised funds in memory of Johdi Russell. “I ran both in memory of Johdi Russell and to support her mother Tanya who works so hard organising The Purple Ball to raise funds for SUDEP Action. After torrential downpours first thing it cleared to a rather warm sunny day. Crowd support was electric all round which  helped carry me through the 26.2 miles in three hours and twenty-one minutes. Boston provided a fantastic experience, everyone couldn’t have been more welcoming. Thanks to everyone who sponsored and supported me.”

Thank you so very much to everyone who raised funds for SUDEP Action in April.

It is not too late to be featured in this blog! Email [email protected] if you would like to be included.