25th May 2017
A place to thank, appreciate and celebrate our fundraisers. 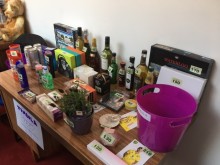 Friends Alice and Cheryl organised a fun fundraiser in memory of their friend Eve Brown. They informed us: “We decided to hold a 'Purple Party' fundraiser in memory of our best friend Eve, who tragically died from SUDEP in 2005, aged just 21. We wanted to raise money to help others bereaved by SUDEP and awareness to help anyone with epilepsy. The fundraiser took place on Saturday 1st April and included a raffle, tombola, quiz and a huge selection of coffee and cakes. We had a fantastic turnout and donations to the cause, including prizes, were extremely generous.” 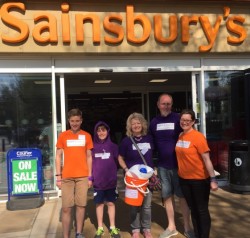 Monica, John, Tom, Xander and Michelle hosted a bag packing event at Sainsbury’s East Grinstead.  The fundraiser was a huge success and the family were amazed at the awareness of epilepsy in the town and the support from the shoppers. Michelle would encourage other SUDEP Action supporters to get involved, it was easy to organise and Sainsbury’s were very supportive. 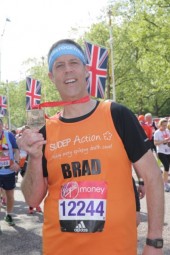 Several SUDEP Action supporters won London Marathon ballot places. Runner Brad Beddingfield took part in the marathon in memory of Bethany Robinson. He commented: “Running in memory of a good friend’s sister made the day all the more worthwhile – a real, once-in-a-lifetime experience, although I want to do it again next year!! The support from sponsors, friends, family, and the public on the day was awesome. So pleased to run this for SUDEP as well, as I felt there needed to be more awareness of the condition and the work you do to support the families involved.” 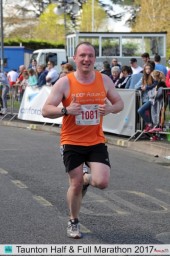 Runner Nick Brown ran theTaunton Half Marathon inmemory of Kim Marie Larkworthy “After attending a fundraising event organised by Tina and Martin Larkworthy for SUDEP Action, I was inspired by their story to help. I decided to take part in the Taunton Half Marathon on 2nd April to help raise awareness and some money.  It was a very hot day, but soldiered on.  The support I received prior to and during the event was phenomenal.  It was a privilege to do my bit, and to wear SUDEP’s striking yet comfy running vest!”

Laura Moir held a quiz night in memory of Toby Rickard-Elliott. She informed us: “In April I moved jobs but instead of a leaving party I wanted to organise a fundraiser quiz night.  Until last year, I had never heard of SUDEP, it was introduced to me through my friend Holly - who's family had been shaken by the loss of her cousin, Toby Rickard-Elliott. We hoped that the quiz would not only raise some money but also act as a platform to increase awareness of SUDEP. The support from everyone at work was brilliant; after all, who doesn't love a quiz?” 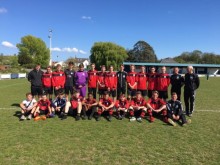 Jack Masters held his annual football event in memory of his dad Pete Masters. He enjoyed playing the football event as his dad always loved watching him play every week. He just hopes it raises awareness for SUDEP Action! It was a brilliant, fun day!! 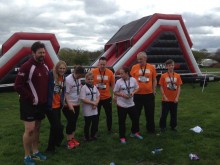 A brilliant team of bouncers took part in the Peterborough Inflatable 5K (1st April) in memory of Nikey Robinson. The team included Nikey’s Neice and nephew Dean and Keira, her dad Pete, Brother in law Phil, and family friends that she had never met but who wanted to help out in her memory. Hundreds gathered and were sent off in waves throughout the day.

Wendy Martyn began her year of no alcohol. She informed us: “I love to support SUDEP Action as it's very close to my heart, after losing my niece Georgina to epilepsy. Georgie was as many others a beautiful young lady with her whole life to look forward to. Georgie had seizures most nights it was rare for her not to have one, she was a beautiful happy girl and battled her epilepsy and never complained. At 19, Georgie had a lovely baby girl and was a wonderful mum to her precious Cali. Sadly, when Cali was 10 months, we lost Georgie to epilepsy. Nothing will bring our beautiful girl back but if giving up alcohol for 12 months (sponsored for the charity) will help and hopefully try and prevent future tragedies, it's got to be worth this party animal being an alcohol-free zone for 12 months. I would like to thank SUDEP Action for the wonderful support you give to so many.” 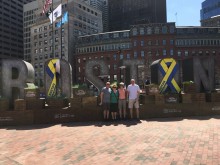 Dianne Halliday ran the Boston marathon in memory of Victoria Hannah. In 2015 Dianne ran the York Marathon and finished in such a brilliant time that she qualified for the 2017 April Boston event. Despite a foot injury three months prior to the run, Dianne finished the race, cheered on by Steve Halliday and Lloyd and Liz Hannah. 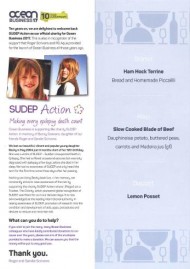 SUDEP Action trustee Roger Scrivens and his wife Sandie lost their youngest daughter Becky to SUDEP in May 2004 when she was only 11 years old. Roger spent most of his working life involved in the ocean research and monitoring sector. In 2007, a new trade show ‘Ocean Business’ was launched by Versha Carter, a good friend of Roger’s and, via his company RS Aqua Ltd, Roger was one of the very first to sign up to participate in the event. From her side, Versha was keen to raise support and awareness of what SUDEP Action (then Epilepsy Bereaved) was achieving and included “Becky’s Story” within the menu for the show’s Gala Dinner.
Roger and Sandie sold RS Aqua back in 2014 but he retains involvement within the ocean research sector. Out of the blue, he was invited by Versha Carter to attend this year’s Ocean Business Gala Dinner as a guest of honour and, to mark the 10th anniversary of the trade show, SUDEP Action was announced again to be the official charity for the event.
Roger and Sandie are delighted with the recognition afforded to SUDEP Action amongst the ‘ocean fraternity’ and many attendees made a point of telling Roger how impressed they are with the charity’s work. A handsome sum of money was collected at the show but, above all, awareness of SUDEP and the work of SUDEP Action was spread amongst an international audience. (Becky’s Story can be viewed at www.rfsocean.com.  Details of Ocean Business can be viewed at www.oceanbusiness.com)

Well done and thank you to all our April 2017 fundraisers.

If you took part in a fundraising event in April and would like to be included in this blog, please email [email protected].