23rd May 2016
April was a great month for SUDEP Action fundraising. Here is what some of our super April supporters got up to.

Abbie Wallis and Matthew held a two week fundraiser at their Pizza Hut workplace. Abbie informed us: “Recently we lost someone very close to our hearts, Andrew Feehan; due to epilepsy. Myself and Andrew’s brother Matthew decided we wanted to take part in fundraising for SUDEP Action since Andrew knew about them and it meant a lot to his family and friends. After 2 weeks of fundraising we've had great fun whilst raising money for an amazing charity, were looking for another opportunity to fundraise, it's such a great feeling contributing to help research for the causes of SUDEP.”

Gareth Allen and Gemma Thompson took part in the Brighton Marathon in memory of Keir Jackson. Gareth informed us about the event: “I finished in a time of 3 hours 15 minutes and 33 seconds and Gemma finished in a time of 3 hours 33 minutes and 59 seconds which we are both thrilled with! Gemma was about 9 minutes quicker than she was last year, which is a great achievement which she is very happy with! We also have raised considerably more than what we were aiming for, even before we did the run on Sunday, which was great for the two of us and helped us round the course an awful lot! We are both resting and recovering well in time for the Edinburgh marathon in 5 and a bit weeks now!”

Supporter Caron Robinson organised a bingo night in memory of her daughter Nikey Robinson. Caron commented: “A family bingo and a raffle was held in memory of Nikey Robinson. Great prizes and fun were theorder of the evening, held at Westwood School in March. Nik loved a game of bingo. Thanks to all those that helped and those that attended. Some double winners obviously wearing their lucky pants.” 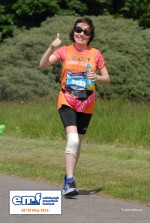 Daniel Hobbs took part in his second marathon, and decided this time to use the event to support SUDEP Action. Daniel commented: “This was my second marathon but the first where I decided to raise money for charity. I looked around for a strong charity to support and decided to raise money for SUDEP Action. My partner has epilepsy, fortunately a mild form, but has suffered from seizures and blackouts in the past, so we understand how suddenly life can be taken away. I hope to support SUDEP Action again in the future and raise more money and complete many more marathons!” 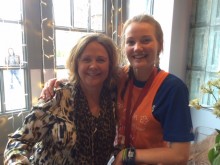 SUDEP Action competition winner Sarah Murray also took part in the marathon. Sarah commented: “A year ago to date, SUDEP advertised 1 place to run in the London Marathon and before I had a chance to think twice about what that might entail, I had won the confirmed place. It was an easy decision to make knowing that I was running for a brilliant charity, and in memory of my good friend, Emily Sumaria. It was a brilliant day, especially now the aches and pain are subsiding – but happy to have my first marathon completed in 4h 18!” 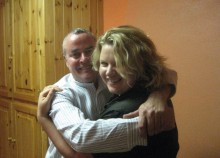 Shane Henderson and his son, Finn, successfully completed the Connemara Marathon – a very tough course. Shane informed us: “We wanted to run in memory of my beautiful brother Garry who died aged 53 suddenly and unexpectedly almost 3 years ago.  Garry developed severe epilepsy when he was 20 as a result, we believe, of having fractured his skull in a bad car crash when he was in his teens.  He lived a full, rich, eventful and very, very brave life.  He never let his condition weigh him down and when it did, he shielded everyone from it.  He was an amazing brother and I miss him.  I am very glad to have helped SUDEP Action - something that I had never heard of until my brother passed away.” 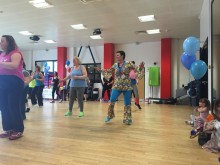 Tracy Stephens held a Zumba Smilethon in memory of her son Stephen Christopher Morgan. Tracy commented: “I’m so proud and touched with so many beautiful people's kindness. I danced with my friends and adorable grandson.”

Lynda Knight took part in the Derby 10K in memory of Janet Mellor. Lynda informed us: “I lost my sister Janet to SUDEP in 1999, the day after celebrating my daughter's 1st birthday (what a difference a day

makes). Janet enjoyed exercise including running. Unlike me! I only began jogging in the summer of 2014, gradually increasing my distance.  This year my goal was to complete a 10k run. I achieved this dream in April in Derby. It seemed fitting to raise money in memory of my sister.  She would be amazed by my achievement!

Linda and Bruce Davis, along with their daughter Jenny Davis, hosted a quiz night in memory Ellie Davis. Bruce informed us: “On 9th April Linda, Bruce and Jenny Davis held the second Percy Pig Quiz night at Christchurch Hall in Wanstead, of their daughter Ellie who died as a result of SUDEP in 2010.  Ably supported by quizmaster Graham Baker, from Woodford, who lost his daughter Billie to SUDEP in 1996, the night was a great success.  The support from friends and family was again brilliant. Local restaurant The Ark also donated money collected from staff and customers. All proceeds were donated to the SUDEP Action Wearable Apnoea Detection Device research programme.  Linda, Bruce and Jenny would like to thank everyone for their generosity.”

Bruce’s Nephew Tom Glattback also took part in some fundraising in memory of Ellie Davis. Bruce informed us: “On 26th April Tom Glattback from Buckhurst Hill, I ran the London Marathon in memory of my cousin Ellie Davis, who died in 2010 as a result of SUDEP, and of my good friend Craig Lobo who died in 2013 as a result of SADS (Sudden Arrhythmic Death Syndrome).  Proceeds were split between the two charities SUDEP Action and SADS (UK). Bruce, Linda and Jenny Davis would like to thank Tom for his fantastic efforts.” 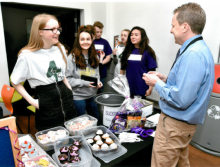 Students from Leeds University took part in their annual Yorkshire 3 Peaks Challenge in memory of Emily Sumaria. The students enjoyed some brilliant sunshine as they tackled a 24 mile walk which involved climbing within 12 hours the tallest mountains of Yorkshire namely Pen-y-Ghent, Whernside and Ingleborough.