A SUDEP-Spinathon event raised £3000 for SUDEP Action.  The event was held in memory of Edward Vergette who died of SUDEP aged just 17 in September 2013. Epilepsy is one of the top 10 causes of early death with at least 1150 epilepsy deaths a year in the UK, about 500 of these being from SUDEP. SUDEP Action works with leading experts to reduce unnecessary deaths from epilepsy through research and awareness.  The charity also provides support for families bereaved by epilepsy. 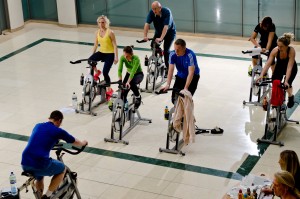 Colleagues of Nicholas Vergette, Edward’s father, helped organise and also took part in the SUDEP-Spinathon held in the ground floor atrium of his work place. Four colleagues completed the gruelling four hour spinning challenge while another 27 completed the challenge on rotor for 15 -30 minutes at a time on two additional bikes.  Local gym LA Fitness provided two instructors, music as well as drinks and towels for the event.

Nicholas said: “The main people involved were my secretary, Karen Power, another secretary Sarah Camp, one of my partners John Cumpson as well as Michelle Kershaw and Caroline Allen who are associates at the law firm.  Michelle and Caroline split their slot.  There were also lots of other people involved going round with plastic buckets collecting cash from people passing through reception from the various office floors in our building.”

“The cash collection raised approximately £1500 which the firm Nabarro very kindly agreed to match making a total of £3000. I'm incredibly 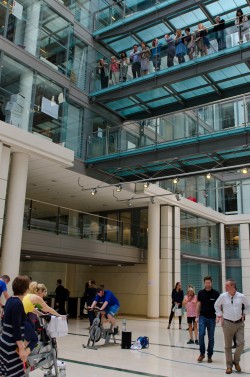 grateful and personally very touched that the event was held and am very much in awe of the fitness of the key people.  It was also great to see everyone participating with such enthusiasm.  In particular I would like to thank Karen Power for providing the inspiration, the organisation and indeed her own participation in the event.”

The SUDEP-Spinathon also helped raise awareness of SUDEP with a SUDEP Action banner on display. Several people gathered to view the event from the elevated walkways in the office building.

SUDEP Action Fundraising and Operations Manager Rachel Groves said: “As someone who has only ever been to one spinning class and almost fainted afterwards, I am in awe of these people who managed to endure it for up to 4 hours! What an amazing achievement in memory of Edward Vergette. And for Nabarro to agree to provide match funding for the £1500 raised on the day is just fantastic. Thank you so much to all who were involved. What an incredible achievement.”