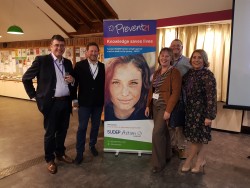 The Mayor of Wantage, the Deputy Lord Lieutenant for Oxfordshire (Mrs. Diana Bagnall) along with many members of the local community and local businesses all attended in support of Prevent21, a national appeal aiming to raise over £1 million over the next four years to tackle these young sudden deaths.

Following on from the national coverage on Channel 4 (on Thursday 16 November) Friday’s launch event, hosted by charity president, Ed Vaizey MP, gave the SUDEP Action team a chance to showcase their work over the last 21 years and highlight the key vision for the new appeal:

Epilepsy claims the lives of at least 21 people each week in the UK, mostly in the young and healthy, leaving families broken and searching for answers.

Ed Vaizey MP congratulated the charity on its achievements over the last 21 years on behalf of people with epilepsy and families who have lost a loved one to epilepsy.
“Leaving no stone unturned, while also supporting bereaved families at the darkest time of their lives, this small and determined team have been working together alongside supportive clinicians from the UK and beyond, with a shared conviction - which is to shine a light on these sudden epilepsy deaths.”

Jane Hanna, CEO, spoke of the journeys taken by those supported by the charity and the charity itself. Jane highlighted the urgent need for action to be taken to reduce the number of potentially preventable epilepsy deaths, which occur each year in the UK, leaving families broken – and how the charity’s new appeal Prevent21 aims to fight this.
“It is ENTIRELY due to the strength and generosity of our bereaved community that such significant understanding and progress has been made so far, and I can’t thank them enough for joining us in taking this fight forward! At a time when the worst thing imaginable has happened to them, shows just how true the quote from Dante is ‘that from small sparks may burst a mighty flame’.”

Jan Burns, SUDEP Action supporter, spoke to attendees about her son Charlie, who tragically died age 10, in 2011. She spoke of the devastation following his death and their tireless campaigning ever since in his memory. The Burns family announced their pledge to support the Prevent21 appeal by raising £21,000 in the next 12 months.
“We like many others did not know of SUDEP, and it’s a sad reality that so many lives continue to be lost to epilepsy-related deaths. No parent should ever have to lose a child – no parent should ever have to lose a child to a potentially preventable condition. As the charity launches it Prevent21 campaign and knowing that we can raise money because we have that sheer determination, that if we can prevent even 1 death by what we’re doing - then it is all worth it. We wholeheartedly endorse the Prevent21 campaign.” 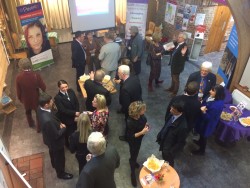 Professor Brown, Chair of Trustees, spoke of his work with the charity since it began and the progress that has been made over the last 21 years. Acknowledging that there is still much to be done, he expressed hope that with support, SUDEP Action can make a real difference with the Prevent21 campaign.

“The PREVENT21 campaign will mean we can now do MORE to save lives SOONER rather than later. In four years’ time, we want to look back and say, as a DIRECT result of this campaign the public have understood and have cared.
This urgency is about saving lives today, and is also about helping the bereaved to rebuild their lives. You would think it bad enough to be suddenly bereaved – but then to have to campaign in public?
That is the reality for the families that I have come to know over twenty years, who campaign in memory of their loved ones; to ensure that not only does every death count, but that future lives can be saved.”

More information about the appeal and how to be involved can be found at www.sudep.org/prevent21.

If you have been bereaved by epilepsy or would like more information about how to reduce epilepsy risks, take a look at our information pages or call 01235 772852.

For more pictures of the launch event, take a look at our gallery.