SUDEP Action, has stepped up its epilepsy patient safety campaign, after a disappointing ruling on Friday 29 March, regarding the legal challenge to the Serious Shortage Protocol.

Last week, the High Court ruled in favour of new powers for ministers to ration medicines in a situation where a minister believes there is, or could, be a shortage of medicines. The judge accepted there were benefits to fair rationing of medications, if that was needed. Also, that this would be done by giving pharmacists new powers to supply medications, against Government protocols developed centrally.

The judge includes the Government evidence, “Even if on a particular occasion one patient might experience the detriment of, for example, receiving a smaller amount of a medicine than had been prescribed, that would be to the benefit of another patient who might not have received any of the medicine, had the rationing scheme not been in place. That is, the arrangements will be to the benefit of patients overall, even if though underpinning this will be individual losses and gains.”

The Honourable Mr Justice Michael Supperstone noted in his judgement that ‘SSPs might not be suitable for some high-risk patients or medicines’ and a Government’s undertaking that an exception for epilepsy treatment will be granted. This was likewise raised during the recent parliamentary debate, where this exemption was requested in writing by Ivan Lewis MP.

SUDEP Action are now following this up with cross party MPs. 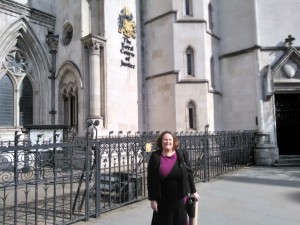 The judge also accepted that the Government needed to move fast to ensure changes were in force before Brexit, and that five clear days for informal consultation was adequate and fair in these circumstances.

He took particular account of the Government’s undertaking that further work would be needed to produce and implement an effective, operational scheme including further analysis of the duty to take special care regarding vulnerable patients.

SUDEP Action led a coalition of organisations concerned about the impact of the law on patients and clinicians, and since then the Government has responded and made additional statements to Parliament and the Court:

Jane Hanna OBE (pictured above), gave evidence to the court on behalf of patients and clinicians said:

“This case may not go to appeal because of exposure to costs, but our coalition will continue to campaign for necessary safeguards for the future. We will hold the Government to the assurances that have been made to Parliament and to the Court, but they are not enough. The public should not be kept in the dark about the causes of medicines shortages or how they are to be managed. The Government said it needed these powers for Brexit, but these are long-term powers. Clinicians we work with are already experiencing shortages and we remain unclear exactly how Government will protect people with epilepsy in the future”.

Take a look at our summary page of the Parliamentary debate to understand more about these legal changes and what you can do to support this patient safety campaign.