Global SUDEP campaign reaches new high at the 30th International Epilepsy Congress in Montreal as Jane Hanna leads a call for openness on SUDEP backed by experts and epilepsy organisations around the world.

Epilepsy, like heart disease and stroke, ranks in the top ten causes of premature deaths and these deaths are potentially avoidable.  Lack of public awareness of epilepsy mortality has meant research and treatment has lagged behind.  Three people die each day in the UK and many young and healthy people have lost their lives.  Initiatives are underway in research, awareness and support for families affected, but funds are urgently needed.

Jane Hanna OBE, Chief Executive of SUDEP Action who received the joint IBE and ILAE Social Accomplishment Award at the International Epilepsy Congress (IEC) for her work on SUDEP over 20 years and Mike Glynn, President of the International Bureau for Epilepsy (IBE), led the call for openness.

Jane said: “Many of the deaths are in the young, putting epilepsy in some countries in the top ten of all causes of early mortality.  In 1990, when my partner died out of the blue, aged 27, SUDEP was not recognised except by a handful of researchers.  The world is a very different place today.  Risk factors for SUDEP are being identified, and strategies to confront them are being formulated.  Although research is urgently needed to advance prevention, we do now have important information for people about what they can do to reduce risk. 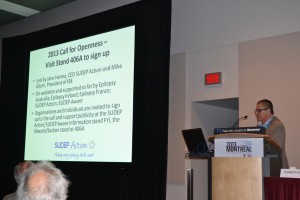 The call is for a common sense approach to alert people at risk to ways to reduce their risk of SUDEP.  One way is to minimise the risk of seizures with good medical management and patient education. Disclosure can help them to understand the importance of accurately reporting their seizures, take their medication as prescribed and make lifestyle choices with seizure trigger minimisation in mind.  Openness can also help reassure people who may have heard about SUDEP that in fact they have a very positive prognosis.

The call for openness on the 25th June 2013 was backed by an international expert panel presenting the SUDEP session – ‘SUDEP prevention - are we there yet?’.  Professor Ley Sander presented on `Discussing SUDEP: does disclosure reduce risk?’ outlining the reasons why early openness with patients is important.  Support for early information on SUDEP for patients has grown since the first national clinical guidelines encouraging openness with patients were developed in the UK in 2004 and the UK, Australia and Canada combined forces in spreading awareness through a SUDEP Global Conversation campaign.  Since then a National Institute for Neurological Disorders and Stroke (NINDS) workshop in the US, the inaugural meeting of Partners Against Mortality in Epilepsy (PAME) and a judicial enquiry in Scotland have recommended the education of all people with epilepsy about SUDEP.

Current practice, however, suggests most patients are not informed about SUDEP.  All those backing the call for openness recognise that people with epilepsy may well respond like all other patients who receive difficult news about their condition and become temporarily anxious, but that information should only be withheld if patients are likely to suffer harm.