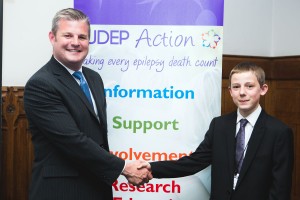 SUDEP Action’s 14 year old supporter Jack Megson was one of the 23 finalists in the Red Cross Humanitarian Citizen Award held in London on 5 October 2013.

Jack was nominated for the award by his MP Stuart Andrew who has supported Jack’s epilepsy awareness efforts in aid of the charity.  SUDEP Action is the only charity in the UK solely committed to preventing epilepsy deaths.

The awards ceremony is an annual event that celebrates the contributions that young individuals make to the lives of others.  There are four categories: first aid, fundraising, volunteering and community action. Jack attended the event where he received a framed certificate for all the work he has done for SUDEP Action.

Jack, who has worked tirelessly to raise awareness and fundraise for the charity, celebrated his nomination saying: “It makes me feel happy that I have done good work for the charity and that people appreciate it. I felt even more pleased when I was told I was nominated by Stuart as it showed how he admired and liked what I had done.”

“Also I would thank him very much for how involved he has become with my charity work and campaigning. My family have been my backbone in supporting me in doing what I have done.  What is most important is that if I get recognised then the charity should be recognised as well”.

Jack’s MP Stuart Andrew nominated him for the award saying: “Jack Megson is an inspirational young man from my constituency, who has campaigned tirelessly for epilepsy charities after the sad loss of his aunt.”

“Jack has done a fantastic job raising awareness of epilepsy and was a guest speaker at the Epilepsy Bereaved National Conference, where he shared his experiences with the other attendees.”

“Jack has also held a number of fundraising events, raising over £600 by holding a coffee morning in Horsforth. Jack also attended an event in Parliament to raise awareness of Sudden Unexpected Death in Epilepsy (SUDEP) and helped to launch The Epilepsy Deaths Register, which aims to improve care and help, to prevent avoidable epilepsy related deaths.

“Jack is a caring, passionate and dedicated young man who would be a worthy recipient of this award.”

Jacks other efforts for the charity have included writing former Health Minister Paul Burstow calling for the government to do more to reduce the number of epilepsy deaths.  There are over 500,000 people with epilepsy in the UK.  At least 3 people a day die in the UK from epilepsy. Recently, Jack walked 50 miles of the Ripon Rowels Walk to raise awareness and funds for the charity.

“We can’t praise Jack enough for the work he has done for the charity since we first met him in 2006 when he was quite a shy 6 year old.  We have seen him grow into a confident articulate young man, who has fully taken on board the need to raise awareness of the risks associated with epilepsy and the needs of those bereaved by epilepsy.”

“From an early age he attended our meetings and conferences, fully engaging with health professionals, never afraid to ask questions.  He is knowledgeable about the charity and its aims and we hope he will continue to support us for many years to come. We fully endorsed the nomination and were pleased that Jack was recognised.”  Karen Osland, SUDEP Action Acting Chief Executive.