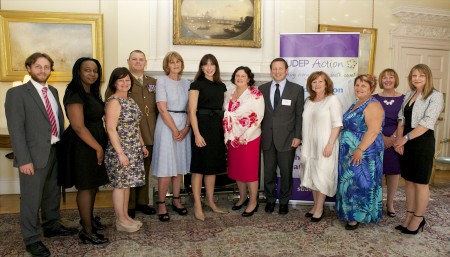 Samantha Cameron hosted a reception for SUDEP Action at 10 Downing Street on 10 June 2014. The night launched the charity’s appeal for research into a sleep monitoring device that could improve prevention of SUDEP. The event was also a fantastic opportunity for the charity to thank some of its dedicated supporters at this world famous address.

Mrs Cameron met with charity supporters and staff at the event which brought together about 120 people including professionals, policy makers and families bereaved by epilepsy. With the support of bereaved families the charity works to prevent epilepsy deaths including Sudden Unexpected Death in Epilepsy (SUDEP) through research and awareness of risk.

Epilepsy claims at least 1150 lives in the UK every year and about 500 of these are SUDEP. The charity launched the appeal for research into the sleep device that will be used to alert carers to dangerous apnoeas that can cause sudden death. The device is a miniature, Wireless Apnoea Detection Device (WADD) that has been proved to detect apnoeas. It was created by Dr John Duncan of University College London through a partnership between researchers at the National Hospital in London and Electrical Engineers at Imperial College.

Jane Hanna OBE, Chief Executive SUDEP Action commented: “We are very grateful to Mrs Cameron for generously hosting us and helping us raise awareness of this issue. Apnoea is a leading contender as a cause of SUDEP. At the moment there is no reliable method to detect apnoea in the home with the consequences that there are hundreds of preventable deaths every year in the UK.”

“We need at least £165,000 to test this device on people with epilepsy as the next step towards a system that may be highly reliable for preventing SUDEP”.

John Hirst CBE, SUDEP Action Trustee and bereaved parent also spoke at the event saying: “When my son died, I could not imagine how life could carry on without him, as many of you here Know, life is never the same after you lose a child. But it does not stop. It changes. Now, eleven years after his death, I still grieve but I am also proud to have helped bring together SUDEP researchers from competing research institutions to pool their expertise. I feel proud to support this new apnoea monitor financially and I hope you will do the same”.