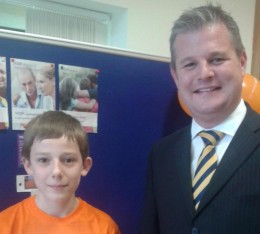 Mr Andrew who attended the event said: "Jack did a fantastic job with his coffee morning and I was thrilled to learn that he raised just over £600 on the day.  It is very inspiring to see his dedication to raising awareness for this health condition which has personally affected him and his family and I hope that others will follow him with his fundraising efforts.”

Commenting on the event, Jack who lost his aunt Helen to epilepsy in 2006 said “The MP attending meant a lot as it showed politicians do care about these types of causes and are willing to address them.  It was very successful and better than I hoped. I was amazed that a lot of people attended the event.”

SUDEP Action Acting Chief Executive Karen Osland commented: “Jack is much valued by the charity and its members.  The support we have received from Stuart Andrew MP through Jack’s efforts is a fine example of what can be achieved from becoming involved and raising awareness in the community.  I know that the family are equally grateful to their MP for the time he has taken to listen and understand the risks associated with epilepsy and the needs of the bereaved.  I hope that others will follow Jack’s lead, as he has certainly proved you are never too young to campaign.”

There are over 500,000 people with epilepsy in the UK.  At least 3 people a day die in the UK from epilepsy.   Epilepsy is one of the top ten causes of premature death.

Jack said he was motived to hold the coffee morning after he managed to raise epilepsy awareness through to his MP.  Jack had sent a series of series of letters to his MP requesting for more to be done to raise awareness of epilepsy.  This resulted in his MP writing to former Minister of Health Paul Burstow MP last year.  The Minister was so moved by Jack’s letter he wrote back to him to explain that the government was committed to supporting high-quality epilepsy research to help save lives.

Jacks Coffee Morning event was held on 27th April 2013 at St Margaret’s parish centre in Horsforth, Leeds.  Jack said his family and some people from his local church helped him organise the event.  He added that: “I would like to give a huge thank you to people who helped organise the event. And people who supported it like Stuart Andrew who helped to raise the now bigger amount of £800.”