Home › Our Global Conversation on SUDEP picks up pace in Asia

Our Global Conversation on SUDEP picks up pace in Asia

5th Aug 2014
More than 16,000 copies of a book that brings together global expertise on SUDEP will have been distributed to epilepsy communities around the world by the end of the 10th Asian & Oceanian Epilepsy Congress (AOEC), taking place in Singapore between 7th and 10th August, 2014.

The book, Sudden Unexpected Death in Epilepsy; continuing the global conversation, combines a collection of considered observations by leading experts with the moving accounts by families bereaved by SUDEP. Sudden Unexpected Death in Epilepsy (SUDEP) is the term used when someone with epilepsy dies suddenly, often after a seizure that involves a loss of consciousness. 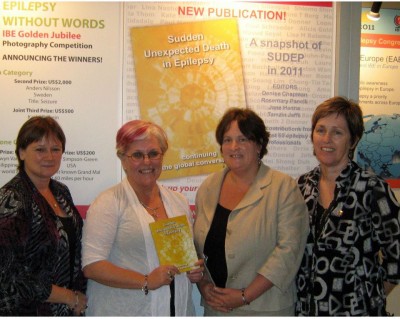 The book’s website www.sudepglobalconversation.com has received almost 300,000 hits.  Now the global conversation is set to reach an even wider market, after over 1,000 delegates to the AOEC 2014 sponsored by the Western Pacific Region of the International Bureau for Epilepsy were each offered a book.

The success of the global conversation is attributed to a powerful three-way collaboration between SUDEP Action, Epilepsy Australia and Canada’s SUDEP Aware, which together reach out to research teams from many countries and over 60 experts from around the world, enabling effective distribution. It follows SUDEP Action’s (the working name for Epilepsy Bereaved) campaign during the 1990s, which sparked a partnership between the UK charity and Epilepsy Australia in 2005.

Dr Rosey Panelli, International Research Officer at SUDEP Action, who has been invited to speak on SUDEP at the conference said:

“By working together we can push forward the global conversation on SUDEP which is vital to research and action on SUDEP wherever we are in the world.”

In 2013 SUDEP Action initiated a Call for Openness on SUDEP which is supported by Epilepsy Australia, SUDEP Aware, International League Against Epilepsy (ILAE); IBE and 13 other epilepsy organisations around the world.

To sign up for the Call for Openness on SUDEP visit https://www.sudep.org/call-openness-campaign