Many of which are young people, dying many years before they should. Yet research has shown that 42% of these could potentially be avoided if steps were put in place to improve care and risk management.

That is nearly 9,000 lives which potentially could have been saved.

These are just some of the messages which SUDEP Action Chief Executive, Jane Hanna OBE, shared with MPs and Ministers at yesterday’s event (17 Oct) held at Portcullis House, Westminster. The event, organised by Ed Vaizey MP (pictured), brought together a dedicated group of SUDEP Action supporters, clinicians, and MPs to highlight the issues faced by the Charity and urge MPs to do what they could to help us tackle this issue head-on and prevent future epilepsy deaths. 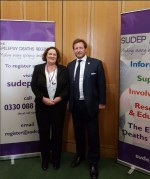 The one-hour event saw 20 MPs (some of which attended at the request of their constituents who support SUDEP Action), hear about the devastating impact of epilepsy deaths first hand, as well as hearing about the amazing work achieved by the charity over the last 21 years.

Bereaved families who crowdfunded early trials of a SUDEP alert device, which has led to funding of 2 million Euros to a research team, announced this news to MPs yesterday. They also highlighted that SUDEP Action had solutions available to save lives now, that they wanted attention drawn to what could be done to help, and also called for support for an enquiry into avoidable deaths.

Many of the MPs in attendance have since pledged to do what they can to help drive this issue forward, and help overcome some of the barriers faced in getting information and tools to people with epilepsy, their families, and clinicians. As well as, helping improve signposting to support services following an epilepsy death. We look forward to working closely with these MPs and sharing news of how this develops over the coming months.

SUDEP Action wish to thank all our supporters who contacted their MP about this event, as well as the families and clinicians who supported us at the event, and spoke so powerfully during the meeting yesterday: Jan, Barrie and Izzie Burns, Roger and Sandie Scrivens, Michelle Samuel, Professor Leone Ridsdale and Dr Gabriella Wojewodka.

Jane Hanna (also pictured) who led the meeting commented, “We know our major challenge is to the taboo that still persists in the 21st century towards these deaths. Families were hugely encouraged by the strong support we received from MPs today to help us break this taboo and start saving young lives.”

For anyone who wishes to contact their MP again about the event, the briefing paper and local press release (which all MPs who attended have received), is available below – please do pass this on to them and we welcome hearing from them if they wish to be involved.

Click here to see our photo gallery of the event