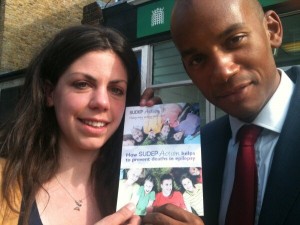 Mr Umunna posted two messages in support of Jane’s awareness efforts and the charity on his Twitter and Facebook pages saying: “Raising awareness of SUDEP Action with my constituent Jane South at my surgery.” He added in another message: “SUDEP Action helps to prevent deaths in epilepsy, one of the top 10 causes of early death.  Here’s their site: sudep.org.”

Jane talked about her meeting with her MP saying: “I was very pleased to have the opportunity to meet with my MP Chuka Umunna.  After I invited him to attend the Parliamentary Reception to launch The Epilepsy Deaths Register on 4th June 2013, he kindly offered to discuss SUDEP in person.
He admitted that he was not aware of SUDEP and was shocked at the statistics presented.”

Jane also talked to her MP about the need to raise awareness of the eye-opening statistics of loss to SUDEP and of SUDEP Action through media.  This also included informing people about The Epilepsy Deaths Register.  She discussed the importance of encouraging the Ministry of Justice and the Department of Health to provide practical help to support The Epilepsy Deaths Register.  She said Mr Umunna also highlighted that there was need for a register such as this.

Jane became involved with the charity following the death of her brother Joe to SUDEP.  Joe had mild temporal lobe epilepsy as a young teenager which took a long time to diagnose.  This was because his family was not aware of the many different kinds of epilepsy and how they present.  Joe experienced many seizure - free months due to the medication he was taking.  He enjoyed a first year at University and it seemed as though his epilepsy was under control when he died in his sleep one evening at home.

Jane says the shock of such an inexplicable loss was awful and seemed unfair.   The unusual nature of it made it difficult to talk about too.  His family was not aware of anyone else that had experienced such a sudden, strange loss.  Jane added that her other brother and herself have since developed seizures and had to adapt consequentially.  She says at least they are better informed of SUDEP and the available help and support for those with epilepsy.

Jane was incredibly grateful and proud to gain the support of her MP.  She said It made her feel less isolated in the difficulties she sees people experience, and has experienced herself.  She added that the meeting meant more awareness of The Epilepsy Deaths Register and more lives improved for people with epilepsy.  She pointed out that the meeting helped her realise that it is possible to gain support, if you have the confidence and belief to give it a go.   Jane says if you believe there is help needed and it can be sought it can be very worthwhile to approach your MP.