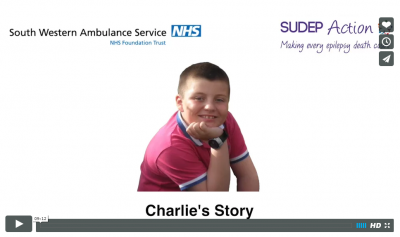 Charlie, from Wiltshire, had his first seizure on 7 October, 2011, and was attended by a paramedic crew who thought it might be a febrile convulsion.  Charlie’s mum Jan then took Charlie to see their GP who suggested he might be suffering from nocturnal epilepsy and referred him to see a neurologist.  Tragically, before the neurologist appointment took place, Charlie had a second seizure and died four days later.

Mum Jan Burns says: “This was an awful situation with Charlie and we want to turn that around in to something positive.  The end result is that we’re hoping, with these training videos, that a significant number of lives are going to be saved.

“We wanted to honour Charlie’s memory and are pleased that initiatives are being taken.  The training videos and the actions taken by South Western Ambulance Service are all we could have hoped for.”  The Burns family has just marked what would have been Charlie’s fifteenth birthday and the fifth anniversary of his death.

The package of training on Sudden Unexpected Death in Epilepsy has been developed by SWASFT, together with the Burns family and charity SUDEP Action, to raise awareness  and to help paramedics and other healthcare professionals to understand and identify epilepsy risk factors including those associated with SUDEP in order to help minimise the risk to future patients.  All SWASFT paramedics will be put through the training programme and the materials and training will also be available to other organisations.

Ken Wenman, chief executive, SWASFT, says: “Following Charlie’s sad death we wanted to take action; wanted to make a real difference and most importantly do something that could support the memory of Charlie, especially to understand what learning we can all take from this sad situation.  Working closely with the Burns family we’ve found a way forward and SWASFT has now developed training videos and will adopt the training programme for all its frontline paramedic staff.”

The training will also be offered to all other ambulance trusts by SWASFT via the National Education Network for Ambulance Services and be made available to other healthcare professionals through SWASFT’s training team.

Jan continues: “Sudden unexpected death in epilepsy is one of the top ten causes of early death.  The condition kills more people in the UK than cot deaths.  Healthcare professionals need to know more about it and the differences of seizures and convulsions.  This training will help make sure our son didn’t die in vain.

“Epilepsy can and does kill.  We didn’t know our little boy had anything wrong with him, there were no neurological signs going on.  The first we knew about it was when had to call for an ambulance, then four days later he had a seizure that killed him. The positive outcome is that we’re now working in partnership with SWASFT to raise awareness.  We want to make sure this doesn’t happen to another family.

“Epilepsy kills 1200 people annually, and since we’ve been campaigning to raise awareness the numbers have increased.   SUDEP is less common in young children than in adults, but can still happen. Charlie, at 10, was very young – one of the youngest.”

The Charity SUDEP Action is holding its annual SUDEP Awareness Day on 23 October.  Charity Chief Executive Jane Hanna OBE commented: “We are really pleased this training is launching in time for SUDEP Awareness Day. The theme for this year is United Against SUDEP because we believe that it is only when people with epilepsy, health professionals, carers and bereaved family work together that we can help reduce future SUDEP Deaths. And this joint working between SwasFT, Charlie’s family and SUDEP Action shows just much can be achieved when we all stand United Against SUDEP. A huge thank you to the Burns family and SWASFT for all they have done in support of the charity in memory of Charlie Burns.”

SUDEP Action reports there are at least three epilepsy-related deaths a day in the UK.  The charity is dedicated to raising awareness of epilepsy risks including SUDEP. Any profits or donations made by SWASFT by sharing the training videos will be given to SUDEP Action.