Jane Hanna speaks at first ever SUDEP roundtable in the Netherlands 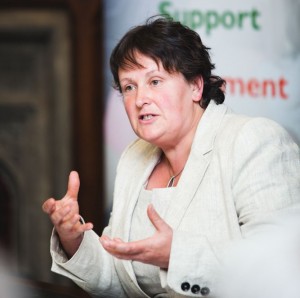 SUDEP Action Chief Executive Jane Hanna spoke at the first Netherlands Epilepsy Roundtable held on 18 November 2013.  The meeting was organised by The Epilepsy Institutes of the Netherlands Foundation (SEIN).

Dr Roland Thijs, from the SEIN Institute said this was the first time a joint SUDEP meeting was held for all stakeholders in the Dutch epilepsy community.

Jane said the meeting was the first important step to tackle SUDEP in the Netherlands - bringing together representatives across research, services and support.

Dr Thijs highlighted the meeting outcomes and commended SUDEP Action’s contribution saying: “The working parties aim to launch new education material by June 2014 and will explore the possibilities to start up a nationwide registry. We are very grateful to Jane Hanna and SUDEP Action for attending this meeting and sharing her great experience in this field.”

Jane commented: “I was honoured to be in invited to share the work of SUDEP Action and our experiences from the UK in addressing epilepsy deaths.  The outcome of the workshop is an action plan – to develop a SUDEP awareness campaign; information on SUDEP and critically establish a SUDEP register”.

Jane also met up again with a bereaved mother she had met many years ago.  She said: “It was an emotional moment meeting a mother whose child died suddenly and who has also been working to raise the cause of SUDEP ever since.”

Dr Thijs said that the meeting was well attended and successful.