29th Nov 2012
More than 15,000 copies of a book that brings together global expertise on SUDEP will have been distributed to epilepsy communities around the world by the end of the 66th annual American Epilepsy Society conference.

The book, Sudden Unexpected Death in Epilepsy; continuing the global conversation, combines a collection of considered observations by leading experts with the moving accounts by families bereaved by SUDEP. 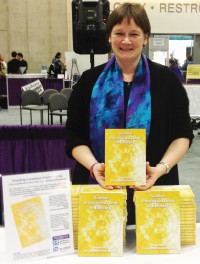 In the last year, the book’s website www.sudepglobalconversation.com received almost 80,000 hits.  Now the global conversation is set to reach an even wider market, after a record-breaking 4,500 visitors to the annual American Epilepsy Society gathering in San Diego were each offered a copy in hardback or on a free memory stick.

Earlier this year books were given to delegates at the European Epilepsy Congress in London.

Jane Hanna OBE, director of UK charity Epilepsy Bereaved, one of the book’s authors, said: “SUDEP awareness is the highest it has ever been in the epilepsy community, yet there is so much misinformation about it being peddled on the internet. That is why this book is in such demand, because it is the authoritative source of facts and advice on SUDEP.  It makes difficult information accessible to everyone and helps health professionals and advocacy groups network to support the cause.”

Sudden Unexpected Death in Epilepsy is the term used when someone with epilepsy dies suddenly, often after a seizure that involves a loss of consciousness.

The success of the global conversation is attributed to a powerful three-way collaboration between Epilepsy Bereaved, Epilepsy Australia and Canada’s SUDEP Aware, which together reach out to research teams from many countries and over 60 experts from around the world, enabling effective distribution.

It follows EB’s SUDEP awareness campaign during the 1990s, which sparked a partnership between the UK charity and Epilepsy Australia in 2005.