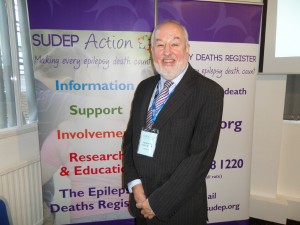 SUDEP Action is pleased to announce that Graham Faulkner has joined the charity as a Trustee.

Graham is a qualified social worker by profession. He has 40 years’ experience in the charitable, private and local government sectors spending the last 30 of those in senior positions. He was Chief Executive of Epilepsy Society for 13 years, retiring in September 2013.

Prior to that he was General Secretary and Deputy Chief Executive with the Leonard Cheshire Foundation (1992-1998) and Chief Executive of Rehab UK (1999-2000), a charity that specialises in vocational rehabilitation for people with disabilities.

In his earlier career Graham was involved in establishing a private company, Retirement Security Ltd that provides very sheltered housing in the private sector, where he was a main Board director.

Graham was a Governor of the UCLH NHS Foundation Trust in London (2004 – 2011), and now chairs a private company, Queen Square Enterprises that undertakes MRI scans and gift aids its profits to the NHS. He also chairs Neurological Commissioning Support (NCS), a company established by the MS Society, Parkinson’s UK and the Motor Neurone Disease Association to improve commissioning of health services for people with long term neurological conditions. He is also a Trustee of the Roald Dahl Marvellous Children’s Charity and the Daisy Garland epilepsy charity.

SUDEP Action Chair of Trustees Professor Stephen Brown commented on Graham’s appointment saying:  “On behalf of all the Trustees and staff I am delighted to welcome Graham to the board of Sudep Action. His wide experience both in the voluntary sector and with the NHS in the fields of epilepsy and neurological conditions will of course make him invaluable to us, but in addition he brings personal attributes of commitment, teamwork and shared values.”